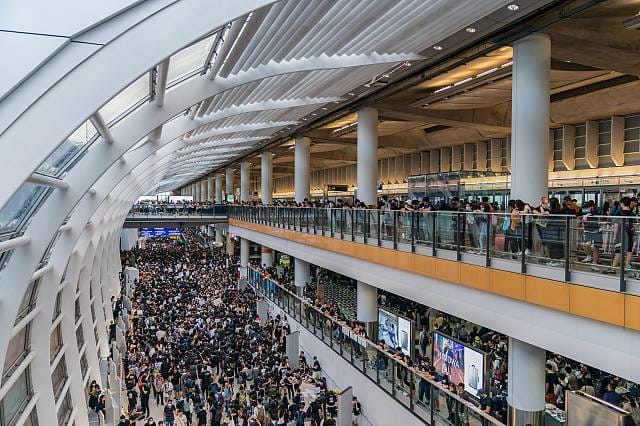 Hong Kong airport has cancelled all flights for a second consecutive day as several thousand protestors have taken over the airport’s terminals.

Carrie Lam Hong Kong’s territory’s leader warned that they have been pushed into a “state of panic and chaos” and that violent protest will push it “down a path of no return.”

Lam told reporters in a press conference close to tears, “I ask everybody again to put aside our differences and calm down, take a minute to look at our city, our home.

“Can we bear to push it into the abyss and see it smashed to pieces?”

“Take a minute to think, look at our city, our home – do you all really want to see it pushed into an abyss?”

According to AFP one journalist said, “You blame your own political misjudgement on others, and refuse to acknowledge your mistakes.”

Hong Kong’s public broadcaster, RTHK asked, “When will you accept political responsibility to end citizens’ fear?… When will you be willing to step down? When will you tell the police to stop?”

On Monday China’s Hong Kong affairs office said the protests are “beginning to show the sprouts of terrorism.”