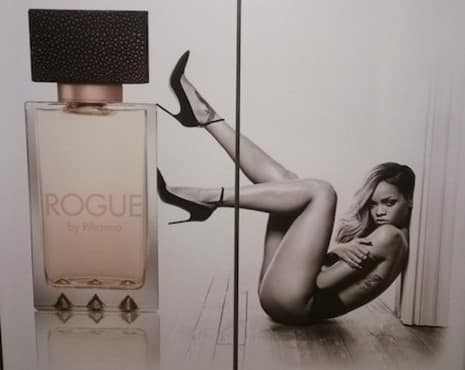 Rihanna’s audacious. Earlier this week, she wore a see-through gown at the Council of Fashion Designers of America (CFDA) Awards.

And now a poster advertising the singer’s new perfume “Rogue By Rihanna” has been banned from anywhere kids might see it.

The advert shows an image of Rihanna sitting on the floor with her legs resting against a large bottle of perfume.

The Advertising Standards Authority (ASA) has branded the image of the singer on the advert as “sexually suggestive”.

In defence of the advert, Parlux Fragrances, the company behind the perfume range, said the image isn’t offensive and that it depicts a position of power.

The ASA said: “While we did not consider the image to be overtly sexual, we considered that Rihanna’s pose, with her legs raised in the air, was provocative.

“Because of this, and the fact that Rihanna appeared to be naked except for high heels, we concluded that the ad was sexually suggestive and should have been given a placement restriction to reduce the possibility of it being seen by children.”

Lunar-tic! A Japanese drink company is putting the first advert on the moon