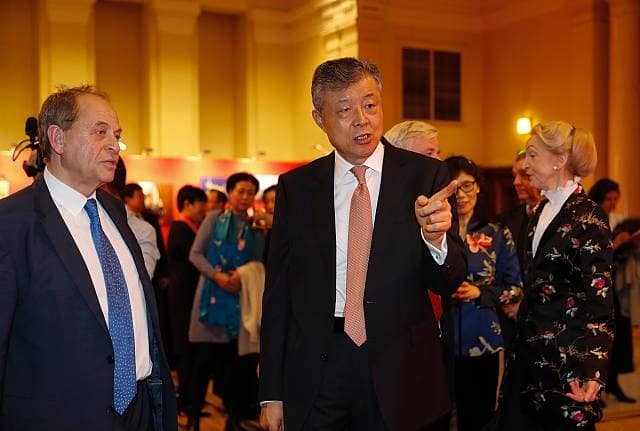 The Chinese Ambassador to the UK Liu Xiaoming gave a press conference on Thursday from London, warning that the relationship between London and Beijing is at a “critical junction.”

This comes after Xiaoming gave a subtle reference to US “interference” and Beijing and London are now “standing in a critical, historical juncture.”

Xiaoming said, “It’s our hope that the UK would resist the pressure and coercion from a certain country and provide an open, fair, transparent and non-discriminatory environment for Chinese investment so as to bring back the confidence of Chinese businesses in the UK.”

The Ambassador accused the British government of interfering in Hong Kong’s affairs and said that China “respects UK sovereignty and have never interfered with the UKs’ internal affairs.”

“It is important the UK will do the same, namely, respect China’s sovereignty and stop interfering in Hong Kong’s affairs, which are China’s internal affairs, so as to avoid further damage to the China-UK relationship.”

Boris Johnson and the Foreign Secretary Dominic Raab have heavily criticised China over their new controversial security laws introduced in to Hong Kong.

The British government claims that this does violate the 1984 Sino-British joint declaration in the territory for Hong Kongers.

Since this the British government have offered 2.9m Hong Kongers who hold a British National Overseas passport (BNO) citizenship in the UK from January 2021.

The Chinese Ambassador to the UK said that once the pandemic comes to an end and after Brexit, there can be “unlimited prospects for China-UK co-operation in areas of trade, financial services, science and technology, education and healthcare.”

Xiaoming added, “It is hard to imagine a global Britain that bypasses or excludes China.

He further expressed that he hopes both Beijing and London have “enough wisdom and capabilities” to sort out their differences.

Xiaoming warned, “rather than allowing anti-China forces and Cold War warriors to kidnap the China-UK relationship.”

The British Prime Minister said he will “continue to engage” with Beijing and Raab has previously said the government wants to work with China.

Johnson said, “What we won’t do, as I say, is completely abandon our policy of engagement with China.

“You have got to have a calibrated response. And we are going to be tough on some things – but also going to continue to engage.”