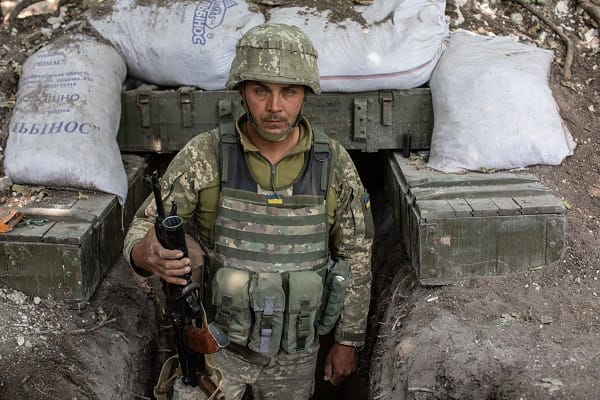 Vladimir Putin’s army has suffered tens of thousands of losses with the Ukraine estimating “almost 43,000” have been killed and the US have predicted around 80,000 have been slaughtered in fighting.

The Ukrainian President has said the more losses Russian forces suffer, the faster they will be able to liberate the Ukraine and the war will be over.

President Volodymyr Zelensky said in a video message on Wednesday evening, “This is a question that worries absolutely everyone: when will the war end?

Zelensky added, “this is what everyone who defends our state and helps Ukraine should think about: how to inflict the greatest possible losses on the occupiers so that the time of the war gets shorter.”

“If almost 43,000 dead Russian soldiers do not convince the Russian leadership that they need to find a way out of the war, then more fighting is needed, more results are needed to convince,” Zelensky exclaimed.

He noted that in just one day, Russia lost ten combat aircraft, nine in Crimea and one more in the direction of Zaporizhia.

President Zelensky added, “Further support for our state in this war, including weapons, will be discussed.

“I am grateful to all our partners who understand that only by ensuring Russia’s defeat on the battlefield, only by Russian losses – military, political, economic – can the return of security for Ukraine and the whole of Europe be brought closer.”