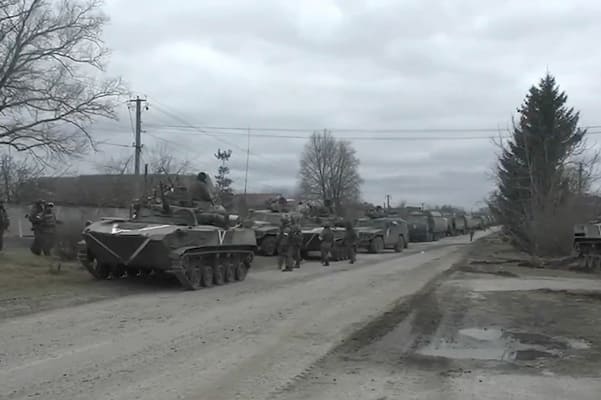 Vladimir Putin’s army is in a desperate state as he is running low on senior military commanders as they have either been killed or injured.

The Kremlin is in crisis are now bringing old men who have long retired along with reservists to replace the dead cannon fodder.

The UK Ministry of Defence (MoD) said the Russian army will “increasingly rely on echelons of reserve forces.”

The MoD said that, despite the Russia army taking heavy losses, the despot leader “remains reluctant to order a general mobilisation.”

The British MoD said in an update on the war, “Over the coming weeks, Russia’s campaign will highly likely increasingly rely on echelons of reserve forces.

“These consist of several distinct components which Russia has almost certainly already started to field.

“The Human Mobilisation Resource is the sizable pool of all veterans who have served in the regular military in the last five years.

“Russian authorities are likely using volunteers from this category to fill out the third battalions within regular brigades.

“Despite a continued shortfall in the number of deployable reservists for Ukraine, the Russian leadership likely remains reluctant to order a general mobilisation.”

Last week threw his top General out of power amid the slow progress in the Donbas region with reports that General Alexander Dvornikov has lost faith in the Russian President.

The “Butcher of Aleppo” General Dvornikov was sacked by Putin because he is furious with his progress in eastern Ukraine as he took too long to capture the Donbas.

Putin has replaced the “drunk Butcher from Aleppo” with another drunk General who drinks a litre of Vodka every day and eats five meals a daily and weighs a shocking 20 stone, he is so fat he has to have his uniforms specially made for him because he is so obese.

The retired General who is almost 70-years of age and has been described as a “second rate” commander will now oversee Russian special forces in eastern Ukraine.

Major General Pavel, 67, is a veteran of the Afghanistan war and has been retired for many years after serving 40-years in the Russian Army.

“Most of his best and battle-hardened senior commanders have been killed or injured fighting in Ukraine so he is resorting to sending second rate officers to the front who don’t last very long.

“He is now dragging generals out of retirement and one of those is General Pavel.

“Putin is like a mafia boss who no one can refuse to obey.

“If a retired general gets a message from Putin saying mother Russia needs you to fight in Ukraine there is not much you can do.

“There is now escape from Russia thanks to the sanctions.”