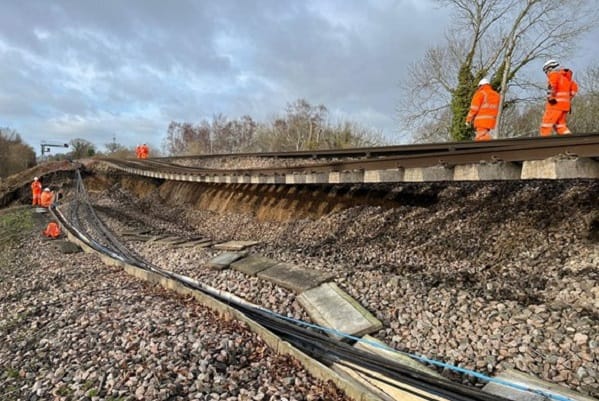 South Western Railway (SWR) has set out its service plan for the rest of this week and weekend, following the major landslip in the Hook area, which has severely reduced the number of trains that can safely run between Basingstoke and Woking.

The landslip has left a 44-metre stretch of track suspended in mid-air, resulting in a severely restricted service between Basingstoke and Woking and no through trains to London Waterloo from Exeter St Davids, Salisbury, Weymouth, Bournemouth, Southampton Central, Winchester and Portsmouth Harbour via Eastleigh.

While the permanent restoration of the embankment is likely to take a number of weeks, Network Rail will undertake track and signalling changes this weekend to provide a short-term solution that will increase the capacity of the line between Basingstoke and Woking.

The works on Saturday and Sunday will mean no trains will be able to operate between Woking and Basingstoke all weekend. SWR services from Exeter, Weymouth and Portsmouth Harbour (via Eastleigh) will continue to terminate at Basingstoke.

SWR is seeking to secure Rail Replacement Buses between Basingstoke and Woking but is asking customers to only travel if absolutely necessary through the area this weekend, as bus capacity is likely to be limited.

In order to complete the work this weekend, Network Rail will postpone planned work on the line between Guildford and Portsmouth Harbour, instead redeploying the engineering teams to support the landslip recovery at Hook.

As a result, SWR will be running two trains per hour between London Waterloo and Portsmouth Harbour (via Guildford) all weekend.

When complete, the works at Hook this weekend will enable SWR to reinstate a number of direct services on the line, reconnecting the South Coast and West of England to London. However, the full repair of the embankment to allow four lines to open is still a number of weeks away. While the changes this weekend will deliver a significant and very welcome increase in capacity from Monday, SWR will still need to run a reduced service until further notice.

Network Rail is planning to complete the works in time for Monday morning’s start up, but due to the complexity involved, customers are urged to check the latest information before setting off at www.southwesternrailway.com/plan-my-jouney. SWR will confirm the service pattern for the week commencing Monday 23 January as soon as possible

Claire Mann, Managing Director of South Western Railway said, “We are very sorry for the ongoing disruption due to the landslip at Hook on Saturday 14, which has meant a severely reduced service on one of the country’s busiest railway lines.

“We know how frustrating this week has been for our customers, particularly those in the Hook, Winchfield, and Fleet areas, with trains unable to stop at these stations.

“Our colleagues at Network Rail are working around the clock and their work over the weekend means we will be able to reinstate direct services from London to Exeter and Weymouth on Monday 23, albeit with a reduced frequency.

“Until these initial works by Network Rail are completed, we must urge customers to only travel if absolutely necessary between Basingstoke and Woking. We would like to thank customers for their patience and understanding.”

Mark Killick, Wessex Route Director at Network Rail added, “I’d like to say how sorry I am for the disruption our customers are facing. We’re working flat out to fix the railway as quickly and safely as possible, and this weekend’s work will deliver big improvement in the number of trains that are able to run until the full repairs are completed.

“Thank you in advance to customers for their patience and to the people who live nearby while we carry out the repairs, they’ve been very understanding and supportive.”