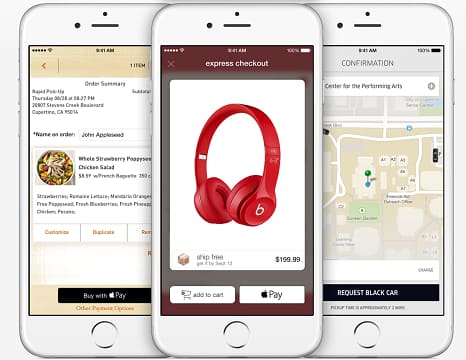 Sophie Hobson: Forget the big iPhone and the watch. Apple Pay is the massive game-changer…

And sure, it launched a watch (which looks to me like a very basic version of an early smartphone, except irritatingly small, and without most of the functions you’d actually want to use).

Yes, it launched a different-sized iPhone too – and another one that was a bit bigger.

But all the media furore over the millimetre-by-millimetre expansion of the iPhone, and the as yet fairly rudimentary Apple Watch, is overshadowing the launch that really mattered at yesterday’s event in Cupertino: Apple Pay.

Apple Pay will let you use your iPhone to make contactless payments.

It will also let you buy things on your phone with one tap of your finger.

US investment bank Piper Jaffray is calling Apple Pay “the most compelling service Apple has offered since iTunes”.

Before we get onto why, I’ll briefly explain…

Apple Pay will let you use your phone to pay for things in shops contactlessly, like a contactless credit or debit card.

Instead of tapping your card to pay, you’ll tap your iPhone 6 or iPhone Plus – and you also have to hold your finger on the screen. Your phone will recognise your fingerprint to avoid other people using your phone to pay for things fraudulently.

This is one way that Apple Pay could usurp contactless card payments in the security rankings, which have no such anti-fraud device. Apple will also encrypt your card details, so that retailers can’t view or store them, and it says it won’t store your transaction history, giving an additional layer of privacy and security.

It’s the one you use when you see this symbol at a check-out:

When you’re shopping for items on your iPhone, whether online or in apps and the App Store, you can use the ‘Apple Pay’ symbol with retailers that are using Apple Pay to again pay simply with your fingerprint.

That cuts out the extreme faff of entering card details, and makes the process even simpler and quicker than PayPal.

Uploading your card details to Apply Pay is incredibly easy too: you just take a photo of your bank card with your phone, then Apple stores it, ready for when you want to pay for something with your fingertip.

Why Apple Pay is a game-changer

Now, a lot of technology and payment companies have been trying to crack this kind of tech over the last couple of years.

Magnetic strips on cards are, after all, five decades old, and cards are prone to security breaches that Apple is obviously keen to highlight, and which it believes Apple Pay will overcome.

But more importantly than that, the mobile payments market is exploding.

Last year, Gartner forecast that the mobile payments market would boast a transaction value of $721bn worldwide by 2017, with a predicted 450 million users.

In the UK, around a third of online shoppers shop exclusively on their mobiles when shopping at the top 10 most-visited online retailers, according to comScore research from February.

It’s not just about the opportunity of mobile shopping, though. The real gold here is found in merging the worlds of online and offline.

By encouraging customers to pay through a single device, regardless of whether they’re shopping online, offline, on their mobile or in any other conceivable realm, retailers and banks capture all payment data, across all platforms.

That gives them a treasure-trove of data on individual customers, which they can use to ramp up personalisation like never before.

Wired has written a good piece on this, if you want more detail.

When transactions are as simple as touching your finger on your phone screen, you’ll inevitably go through with more transactions than the olden days of yore, when you had to fill out reams of card data and personal information over multiple pages of an online payment process.

Most analysts are expecting Apple Pay to be slick and quick enough to blow other mobile payment technologies out the water.

That means Apple could be set to dominate this market, creaming off its percentage of all the payments you make, everywhere you go.

The promised simplicity of Apple Pay (which will come into use in the US in October, with a UK launch date yet to be announced) explains why many of the biggest US banks – including Bank of America, CapitalOne, Chase, Citi and Wells Fargo, with more to come – have happily signed up to the service, even though they lose some of their own transaction fees.

Apple Pay will be usable in the 220,000 major US retailers that accept contactless payments.

There are, though, some major barriers Apple Pay will need to overcome in the short term.

Firstly, it can only be used with the freshly launched iPhone 6, iPhone Plus and Apple Watch.

That might, in time, drive up sales of each of these devices, but in the immediate future it will limit the adoption of Apple Pay.

Apple Pay will also need many more retailers to install contactless payment at their check-outs if it wants to become ubiquitous – a technology some retailers resent, as they incur transaction fees from processing cards.

But we all know Apple has a killer track record when it enters a new market, whether that be digital media, hardware or cloud storage.

Tim Cook might not have been exaggerating when he told last night’s conference that “Apple Pay will forever change the way we buy”.

Here’s some good insights from elsewhere if you want to find out more:

Wired: How Apple Pay Will Destroy the Online-Offline Shopping Divide

The FT: Apple looks to swipe the payments market

“Dear iPhone 6 users, welcome to 2012” – this was the message Android users had for everyone itching to get their hands on the new iPhone 6 and iPhone 6 Plus.

Apple of our i: iPhone 6, iPhone 6 Plus and new Apple Watch – in pictures

Apple’s new telephones and watch have now been officially recognised as existing.