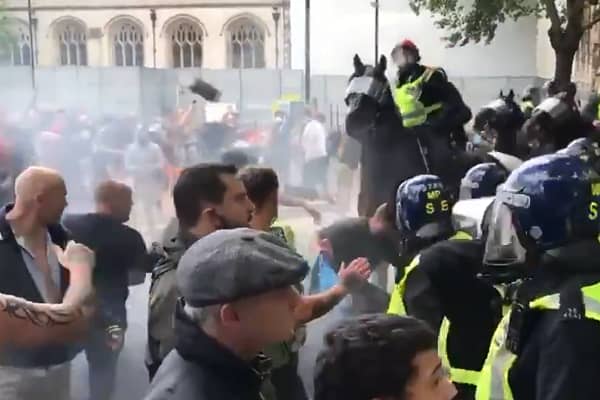 SAGE warns riots to hit England ‘within days’ over lockdowns

The Scientific Advisory Group for Emergencies (SAGE), which advises the government have warned that England could be hit by a wave of rioting “worse than that seen during the clashes in 2011.”

Prime Minister Boris Johnson announced on Friday that lockdown easing will be halted for the next two weeks in England.

Jonson said it is vital to “squeeze the brake pedal,” to avoid the spread of coronavirus which will prevent a full national second lockdown.

SAGE said in documents, that the British Army could be sent into contain widespread rioting, as they warned that tensions in England are high.

This comes the country has seen many protests, including Black Lives Matter, with rival demonstrations in June, along with racial inequality and mass restrictions on street and house parties.

A SAGE document warned, “In the next few weeks and months the UK will face grave challenges to public order.

“The situation is volatile and highly complex.

“Tensions resulting from the pandemic and lockdown have become inextricably bound with structural inequalities and international events.

“While widespread urban disorder is not inevitable, currently, the situation in the UK is precariously balanced and the smallest error in policing [whether perceived or real, inside or outside the UK] or policy could unleash a dynamic which will make the management of Covid-19 all but impossible.

“Put simply, a serious deterioration of public order could overwhelm all attempts to control contagion, overwhelm hospitals, the criminal justice system and hinder revival of the economy.”

The police will be in a far worse position from the 2011 riots to deal with civil unrest due to the large cuts in number, the SAGE report warns.

SAGE warned the “government should take account of intelligence on community tensions and other factors that may be inflamed by the extension or imposition of local lockdowns.

“Public health measures are never simply scientific decisions and the consequences in terms of public order (and ultimately for public health) could be serious if lockdown imposition is ill-judged.”