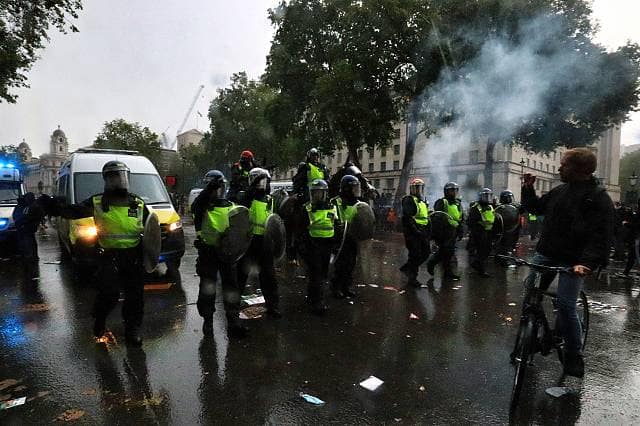 Mayor of London Sadiq Khan has been attacked over failing to support the police over the violent protests last weekend as over 30 officers were injured.

Metropolitan Police Federation chairman Ken Marsh hit out at the Mayor as violence was directed towards the police and he is “very disappointed” over his response.

Protestors targeted police with violence outside Downing Street, and Khan condemned the violence, but Marsh said he should never have allowed the demonstrations.

Marsh said, “Why didn’t he shut the Tube when he knew this was going to happen?

“Leaders at tough times like this need to lead.

“He’s been a great advocate for the lockdown, but when it comes to this he’s done nothing.

“How’s that for looking after your coppers? I’m bewildered.”

A spokesman for the Mayor said, “The responsibility for banning protests lies with the police and not the Mayor.

“But Sadiq has made it clear that COVID-19 remains a very real danger to our communities and urged Londoners to consider different ways to make their voice heard that does not put themselves or others at risk of infection.

“Those that behaved violently and irresponsibly at the protests are in no way representative of those that protested respectfully, and their actions towards police officers who worked long hours to facilitate the protest were totally unacceptable and will not be tolerated.”

The Metropolitan Police fear there will more violence this weekend as far right groups are set to confront anti-racism activists this weekend.

The Democratic Football Lads Alliance (DFLA) have called on all their members to “defend” London statues and war memorials to protect “our heritage.”

Black Lives Matter have published a list of 60 “racist statues” that they want to be removed, but DFLA leaders are urging their 1,000 plus supporters to “defend what our war heroes done for this country and their honour.”

Marsh gave a stark warning, “We have got the perfect storm ahead of us this weekend, we have got planned protests and now Tommy Robinson and his agitators.”