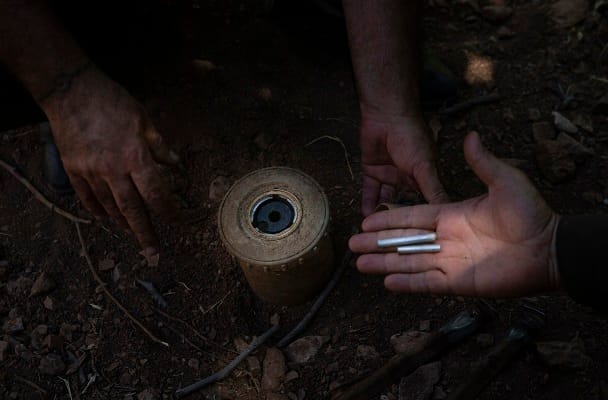 Russian forces are using the horrific banned “jumping” anti-personnel landmines which contain a sensor which detects a person approaching then jumps into the air and explodes.

The Ukrainian bomb disposal teams in eastern Kharkiv found the POM-3 landmines on 28 March, which does fire a deadly explosive charge into the air which will rip apart a body.

Steve Goose, the arms director of Human Rights Watch, told The Daily Telegraph: “Countries around the world should forcefully condemn Russia’s use of banned anti-personnel landmines in Ukraine.

“These weapons do not differentiate between combatants and civilians and leave a deadly legacy for years to come.”

These mines were banned under the 1997 international Mine Ban Treaty, which strictly prohibits the use, production, stockpiling and transfer of anti-personnel mines, however these were built in 2021.

The POM-3 also known as the “Medallian” or “Bouncing Betty” contains a high explosive charge which scatters in all direction and on dispersal the landmine is orientated by a parachute and has a lethal radius of 16 metres.

Russian troops fire rockets from as far away as 15km which then disperse the landmines which are specially designed to land on the ground ready to blow up anything that comes its way.

Goose said, “Russia’s use of antipersonnel mines in Ukraine deliberately flouts the international norm against use of these horrid weapons.”