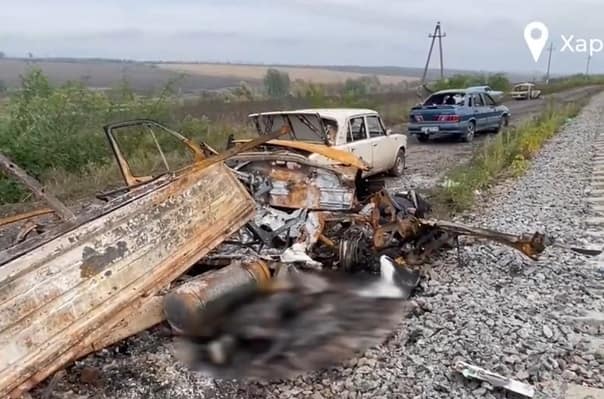 Twenty people have died following a shelling attack on a civilian convoy on Saturday which included 10 children and then shot dead a six year old at “point blank” using “small arms” weapons.

The Security Service of Ukraine (SBU) is investigating the deliberate “execution” of the civilians and they have blamed Russian “sabotage and reconnaissance group.”

Kharkiv governor Oleh Syniehubov said the attack on innocent civilians was “cruelty that can’t be justified.”

The civilian convoy was attacked in the so-called gray zone between the occupied Svatove of Luhansk region and liberated Kupiansk in Kharkiv region, acting head of the SBU Vasyl Maliuk has said.

He added, “At the end of September, the ruschists completely destroyed a convoy of seven cars.

“At least 20 people were killed, including 10 children.

⚡️SSU published a video from the place where the Russian military shot a civilian convoy in the so-called "gray zone" between the occupied Svatovo in the Luhansk region and the liberated Kupyansk in the Kharkiv region. pic.twitter.com/OiPPcBVEOD

“A brutal attack on civilians was made by a sabotage and reconnaissance group of invaders – they shot six old passenger cars from small arms almost point-blank and one GAZelle vehicle.

A civilian convoy found after an attack on it in Kupiansk district, #Kharkiv region. At 20 killed in the cars, including children. There are no words to describe #russia’s cruelty. pic.twitter.com/KZ0XFODaqW

“The enemy has once again proved that his goal is the destruction of all Ukrainians, regardless of age and gender.

“The occupiers are defeated on the battlefield and out of desperation respond to them by killing civilians.”

The final number of victims is still being established, and appropriate examinations are being carried out by the SBU.

Ukrainian authorities found a civilian convoy with about 20 people dead in their cars near Kupiansk, according to Kharkiv Oblast Governor Oleh Syniehubov. pic.twitter.com/J7aw6uPDpl

Several people who were riding in the shelled convoy managed to escape. Now they are giving their testimony to the investigators.

At present, the identity of those killed by the Russians is being established, and a comprehensive recording and collection of evidence of this war crime for the International Criminal Court (ICC) is underway.

“Such crimes do not have a statute of limitations, the perpetrators of these crimes will certainly be held accountable for their deeds,” the SBU said.