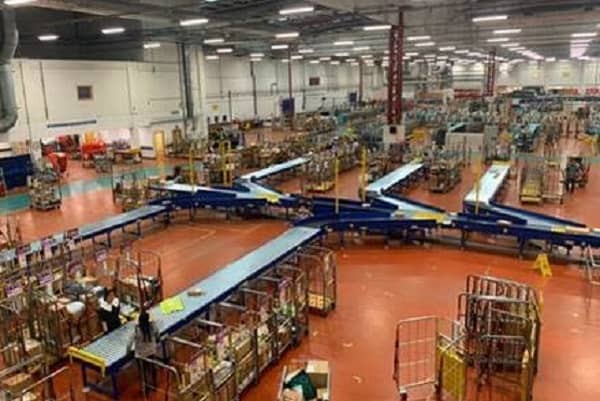 Royal Mail has unveiled its first new large parcel conveyor in Gatwick Mail Centre to support the automation and customer tracking of larger parcels in the network.

The conveyor is capable of processing bulky parcels weighing up to 30kg offering improved tracking information to customers.

Designed to process around 3,000 large parcels per hour, the machine is fitted with a dimension, weight and scanner system designed to handle bulkier items. This provides Royal Mail with a rich source of more accurate data that enables managers to more efficiently pack and route collection vehicles, thereby helping to reduce operational carbon emissions.

The conveyors handle parcels classed as Format 3 & 4 which are items measuring a maximum of 610x460x460 and up to 30kg in weight. This is about the equivalent in size to a parcel containing a microwave oven.

The second large parcel conveyor will launch soon in Royal Mail’s South Midlands Mail Centre with the potential for additional launches in mail centres across the UK in the future. Gatwick and South Midlands have been chosen because they are the mail centres which process the most oversized parcels in the Royal Mail network.

The new conveyor directly supports Royal Mail’s transformation into more of a parcels-led business to meet the changing demands of its customers.

Royal Mail is pursuing an ambitious programme of automation. In March 2022, it reached the milestone of 50% parcels automated – up from 33% the previous year. The business is aiming to reach its overall target of 90% parcel automation by 2023-24.

In June, Royal Mail opened its huge new North West Super Hub in Warrington which can process more than 800,000 parcels a day. Its Midlands Super Hub, based in Daventry, is on track to open in Summer 2023 and when operational, will be able to process more than one million items per day.

Grant McPherson, Chief Operating Officer at Royal Mail, said, “We are working hard to transform the Royal Mail operation to process all parcels more efficiently so that we can deliver an even better experience for our customers.

“By investing in machines that can process bulkier and heavier parcels, we are putting in place the building blocks for higher levels of customer tracking and transparency. This new large parcel conveyor is just another example of how we are investing in reinventing Royal Mail for the future.”

The ‘best and final offer’ is on the table to...

Royal Mail strike to cause disruption in run up to...

Post Office partners with Evri so people can drop off...