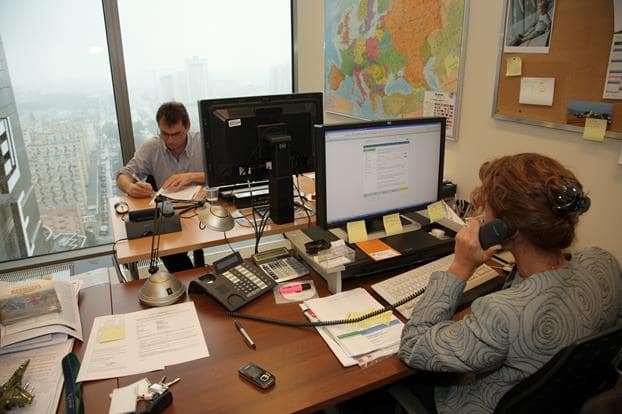 Revealed: Why Londoners are skipping lunch to eat ‘al desko’

Despite nearly three quarters of London employees agreeing that taking a full lunchbreak is good for their mental health (73%), diet (67%) and personal wellbeing (75%), still nearly a third (28%) of Londoners only manage to get away from their desk to take a full break two-three times a week.

The survey conducted by Flexioffices with 2,000 UK workers comes as many Brits have kicked off their new year’s resolutions with the aim of looking after the health and wellbeing. With work pressures mounting up, many feel they can’t leave their desk at lunch for some ‘me time’ in fear of slipping behind on their work.

The study which asked London employees across various sectors revealed that nearly a quarter (21%) cannot complete their work if they take the full lunchbreak they are entitled to.

Other reasons stated were that some wanted to appear like they’re working hard (13%), some felt that even though they work in the bustling capital they have no reason to leave the office (17%). Nine per cent think it will help them land a promotion, or that they will be scrutinised if they leave their desk. Of the employees who stated they believe it will help them get a promotion, over a quarter (26%) also said they feel guilty If they don’t eat their lunch at their desk.

But if workers of the capital don’t take their lunch hour away from their desk, results show it can negatively impact personal and work progression. This includes stress and happiness levels, productivity and concentration.

Even though many London workers skip their break, they agree that taking time away from their desk is important for professional performance (68%) and concentration (74%).

Stuart Roberts, author of Get Strong, Get Fit, Get Happy said, “New research indicates that sitting down for prolonged periods can contribute to a range of frightening health issues including increased blood pressure, raised blood sugar, elevated levels of bad (LDL) cholesterol, as well as slowing the metabolism leading to inefficient circulation, digestive and energy systems, postural problems, weight gain, the list goes on and on.”

Worryingly a quarter (25%) of London’s nurses, doctors and other healthcare workers employed in the high-pressured sector only manage to take their full lunch break once a week.

The statistics also revealed a worrying trend for teachers and educational professionals. Nearly a third (31%) stated they only managed to have a full lunch break 2 to 3 times a week but acknowledged the importance of breaks for their wellbeing (75%) and performance (68%).

In both professions over half of people working in healthcare (57%) and education (53%) said that their employer encouraged them to take their full lunch break, yet one of the reasons they don’t is because of unsuitable facilities provided by their employer.

Another sector feeling the pressure and losing lunch is those working in the legal sector,  nearly half (45%) stated that they cannot complete their work if they do and over a quarter (27%) said that by not taking their lunch they feel stressed and like they have no freedom.

It doesn’t seem to matter which sector in London you work in, over a quarter of all employees in the capital (27.6%) only manage to get out 2 to 3 times a week. Nearly 70% of HR professionals, half of Architects (53%) and nearly 40% of people working in IT and telecoms manage to only take their full hours entitlement 2 to 3 times a week.

Roberts added, “The current research suggests that we should try to spend no longer than three hours a day seated if we are to get the maximum health benefits.”