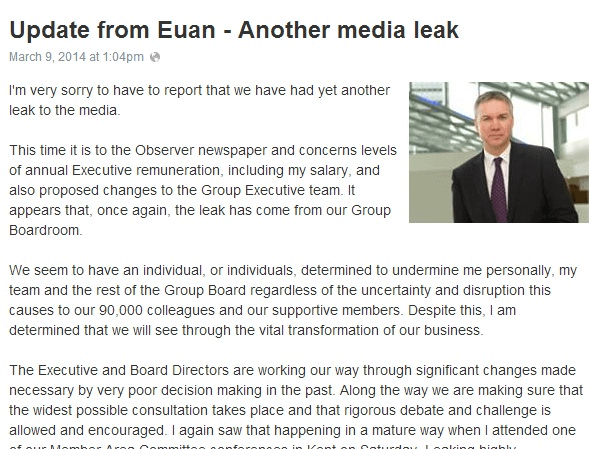 Euan Sutherland, the Co-operative Group’s chief executive, has taken the rather odd decision to berate his board in a Facebook post to all Co-op employees, after his pay details were leaked to the media.

He wrote that he believes that “once again, the leak has come from our Group Boardroom”.

The Observer reported yesterday that the Co-op boss will get a base salary of £1.5m and a bonus of £1.5m. The executive team as a whole will receive £12m.

Sutherland posted the below message on Co-op’s Facebook page for employee news yesterday afternoon, condemning his boardroom for the leaks over pay.

Perhaps unsurprisingly, it provoked many unsupportive and annoyed messages from his staff. Hats off to City AM for spotting the Facebook post.

Read it in full below:

Update from Euan – Another media leak

I’m very sorry to have to report that we have had yet another leak to the media.

This time it is to the Observer newspaper and concerns levels of annual Executive remuneration, including my salary, and also proposed changes to the Group Executive team. It appears that, once again, the leak has come from our Group Boardroom.

We seem to have an individual, or individuals, determined to undermine me personally, my team and the rest of the Group Board regardless of the uncertainty and disruption this causes to our 90,000 colleagues and our supportive members. Despite this, I am determined that we will see through the vital transformation of our business.

The Executive and Board Directors are working our way through significant changes made necessary by very poor decision making in the past. Along the way we are making sure that the widest possible consultation takes place and that rigorous debate and challenge is allowed and encouraged. I again saw that happening in a mature way when I attended one of our Member Area Committee conferences in Kent on Saturday. Leaking highly confidential internal documents to the media before decisions have been made only makes our open approach to discussion more difficult to sustain.

The remuneration report is still not finalised and will be published, along with our annual results for 2013, on Wednesday 26 March. The changes to my Executive team are also still being finalised and we will announce these to you next Monday (17 March). It is important that we continue to follow due process despite this leak.

I wish I could promise you that this kind of occurrence will not happen again. You deserve to hear information in a proper, orderly and considered fashion. But we appear to have disaffected people who are determined to make life difficult and embarrassing for The Co-operative at a time when what we need most are professionalism and loyalty to the business.

I thought you should see the statement issued by our Group Chair, Ursula Lidbetter, to the media yesterday.

“Last year The Co-operative Group faced the biggest crisis in its 150-year history with the need to recapitalise its Bank. We saved the Bank, without recourse to the taxpayer and we are now embarking on the long and complex journey to revitalise the wider Group. That means reducing debt, improving performance and streamlining a business that had become grossly inefficient. It is against that backdrop that we recruited Euan Sutherland and a top team with the skills and experience needed at this crucial stage in our history, reflecting the necessity for change. The remuneration packages of our executives are in the middle of a range of comparable companies. This represents an increase on the pay of their predecessors to reflect the greater commercial, management and turnaround experience they are bringing to bear. Euan and his team have already made a significant contribution to The Co-operative Group and we are confident that they will continue to do so.”

In a few weeks we will report large losses for the Group in 2013 and in April the inquiry by Sir Christopher Kelly into the Bank crisis will be published. These will bring further low points for us and the reputation of The Co-operative will take another hammering. But then we will be able to move forwards, first through Lord Myners’ report on our governance, and then in May we will have a much brighter story to share with you and with our members and customers as we unveil our new purpose and strategy.

Thank you for your forbearance as we get through this difficult period.