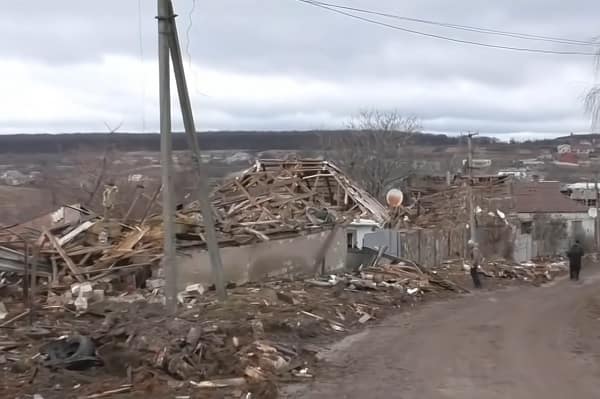 Vladimir Putin’s troops have wiped out an entire village off the map and smashed Yakivlivka “to smithereens” killing many innocent civilians.

The village of Yakivlivka is north of the Ukrainian city of Kharkiv and there was “no obvious military target” in the area which decimated 45 homes and left four residents dead.

ITV’s Dan Rivers said that there was “no reason” for the brutal attack on Yakivlivka as overnight the village suffered a horrific bombardment.

The Prosecutor’s Office of the region of Kharkiv said Russian forces have “destroyed the entire village.”

Rivers explained, “This is a normal Ukrainian village, which has been smashed to smithereens for no reason that I can see of.

“There is no obvious military target here. There is no garrison of troops.

“There is no significant infrastructure. It just seems to be a normal Ukrainian village that has paid the price of this war.”

A local resident called Natasha told ITV news that she sheltered nine people in her home during the shelling including young children.

She said, “There are all these mothers who don’t understand, who don’t have information in Russia about what is happening here.

“Their children are being killed, they are being used as cannon fodder.