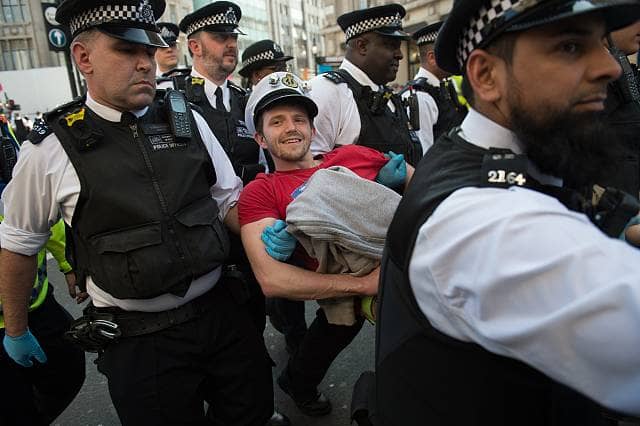 More than 20 Extinction Rebellion protesters have been arrested on Monday morning as police clashed with activists.

Arrests have been made on the Mall after a human blockade, vehicles have been prevented from crossing Lambeth Bridge and Westminster, the two bridges remain blocked.

Victoria Embankment is also blocked, and the Ministry of Defence (MoD) was also targeted. Hundreds of activists are meeting at Trafalgar Square, Parliament Square, Downing Street, the Department for Transport, the Treasury, Home office and Whitehall waving XR flags.

Hundreds of police have been deployed to all the areas affected and road diversions are in place.

The Met Police said in a statement, “As of 8am this morning there have been a total of 21 arrests in connection with the Extinction Rebellion protests.

“We have no further details at this stage.”

The spokesman added, “The arrests are in addition to those over the weekend, with eight people arrested on Saturday – seven on suspicion of conspiracy to cause public nuisance, and the eighth on suspicion of obstructing police.”