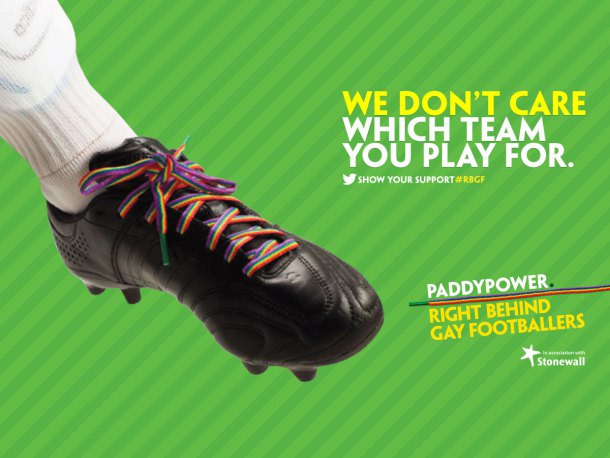 Now here’s a lovely story about a business going activist, to make a positive change in the world. Paddy Power has partnered with sexual equality charity Stonewall to launch a campaign supporting gay footballers.

Paddy Power is running billboards with messages including: “Over 5,000 professional footballers and none of them are gay. What are the odds on that?”

The campaign is called Right Behind Gay Footballers, and the aim is to combat homophobia in football and support gay footballers. Another campaign ad says: “We don’t care which team you play for.”

There are no openly gay footballers in the English and Scottish professional leagues. Paddy Power said on its website: “It’s recognised that gay footballers are too worried about the impact on their careers and personal lives to ‘come out’ – rather than there being no gay footballers.

“This scenario has odds of over a quadragintillion to one. And, no, we’re not taking bets on the subject.”

Paddy Power has also sent rainbow-coloured shoelaces to all 92 Premier and Football league teams, and the 42 teams in the Scottish leagues, to raise awareness about the cause.

Players have been asked to wear their laces on Saturday 21 and Sunday 22 September to show their support.

A Paddy Power spokesperson said: “We love football but it needs a kick up the arse.

“In most other areas of life people can be open about their sexuality and it’s time for football to take a stand and show players it doesn’t matter what team they play for.”

The billboard ads encourage you to support by using hashtag #RBGF on Twitter.

Boris Johnson fends off criticism over “up the Arsenal” quip