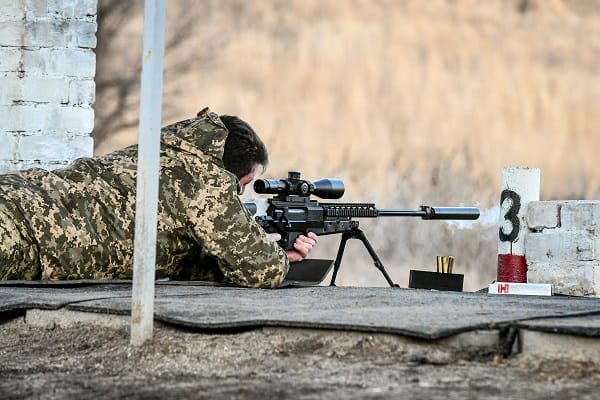 One of the world’s most deadliest snipers has arrived in Ukraine to fight alongside Ukrainian forces to kill Russian troops.

The sniper only known as “Wali” answered President Voloydymr Zelensky for foreign fighters to join to protect Ukraine.

Wali served in the Royal Canadian 22nd Regiment who fought in Kandahar, Afghanistan between 2009 and 2011 and in 2015 fought with Islamic State until last week.

Putin sends in Chechen soldiers and Wagner group mercenaries who are paid $2,000 a day to capture Kyiv

‘Wali’ was contacted by a friend who was trying to arrange a “neutral humanitarian aid convoys” into the eastern Donbas region of Ukraine.

Wali described the moment he decided to take the call to join the Ukrainian volunteer forces as like a “firefighter who hears the alarm ringing.”

“When I see a destroyed building, it is the person who owns it, who sees his pension fund go up in smoke, that I see.

“I have to help because there are people here being bombarded just because they want to be European and not Russian.

“I’m going there for humanitarian reasons.”

He leaves behind a wife and a one year old son, whose identity is being protected for security reasons.