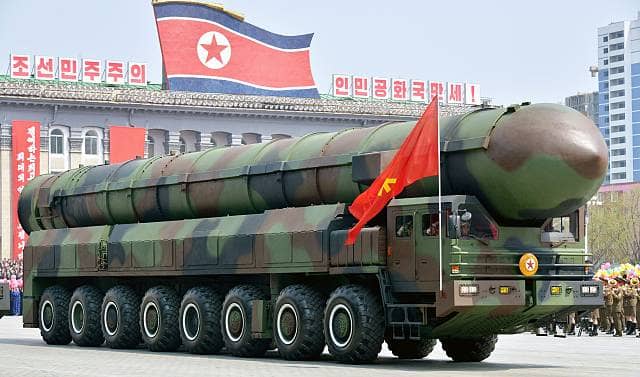 The US said that the launch took at 10:21pm UK time however, the missile “blew up almost immediately.”

South Korea’s defence ministry said: “North Korea attempted to test an unidentified type of missile from Sinpo area in the South Hamkyong Province this morning, but we suspect the launch has failed.”

US Pacific Command later confirmed the fail test and said that the military are “fully committed to working closely with our allies in the Republic of Korea and in Japan to maintain security.”

Commander Dave Benham of the US Navy said: the missile blew up almost immediately” which was quoted by Reuters.

Saturday’s parade featured a new type of intercontinental ballistic missile (ICBM) however, it is still not clear whether or not North Korea’s missile test Sunday was nuclear or not.

A British Foreign Office spokesman said: “We are concerned by reports of a missile test by North Korea and are monitoring the situation closely.”

Boris Johnson the Foreign secretary speaking of the failed attempt, “we have been here before” and urged Pyongyang to adhere to the UN resolutions.

Johnson said: “We stand alongside our international partners in making clear that North Korea must adhere to UN resolutions designed to secure peace and stability in the region and stop its pursuit of nuclear weapons.”

Tim Farron the Liberal Democrat leader, said that the PM and Johnson need to use their influence and tell Trump that “aircraft carrier diplomacy” is the wrong answer.

Farron said: “If Theresa May and Boris Johnson really do have any influence with their great friend in the White House they need to make clear that aircraft carrier diplomacy is not what the world needs.”

“Where is Britain’s new global influence that Theresa May was boasting about? On Syria, Russia and now North Korea, the British Government has no influence, cut off from our partners in Europe thanks to their hard Brexit.”