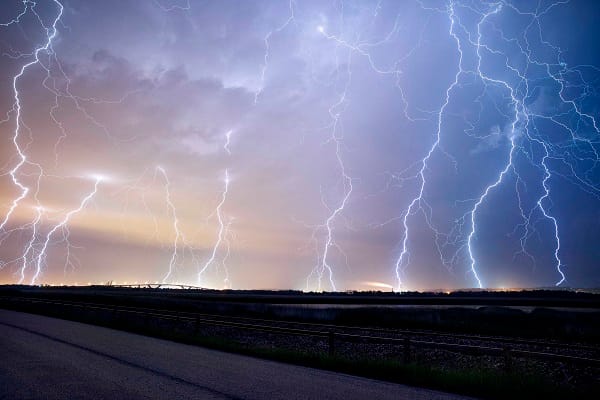 Forecasters are warning that there will be a “big change” in the weather over the Easter weekend which will bring snow, hail and rare thundersnow.

The whole of the UK is expected to experience wintry conditions on Easter Monday with a wind chill that will make temperatures feel below zero.

Alex Deakin from the Met Office warned, “We are going to see a change during the weekend.

“Across the North, that will happen on Sunday but by Monday all parts of the UK will be significantly colder as Arctic air arrives bringing hail and snow showers, and a significant wind chill.”

Some parts the UK could see a rare phenomenon called thundersnow which is a thunderstorm with snow falling instead of rain.

The Met Office has said over the weekend it will be mainly “dry and bright” with temperatures a lot lower than they were at the start of the week.

Deakin added, “There will be much colder air flooding southwards, through especially Sunday night, and by Monday we’re all in that colder air.

“Temperatures [will be] 6 or 7C, average values for January add on the strength of the wind and it will feel much closer to freezing, feeling sub-zero for many.

“Added onto that there will be lots of wintry showers as well, snow and hail showers almost anywhere, and down to low levels as well.

“It probably won’t stick around for very long but it could stick around on some hills, particularly as we get to Monday night and into Tuesday.”