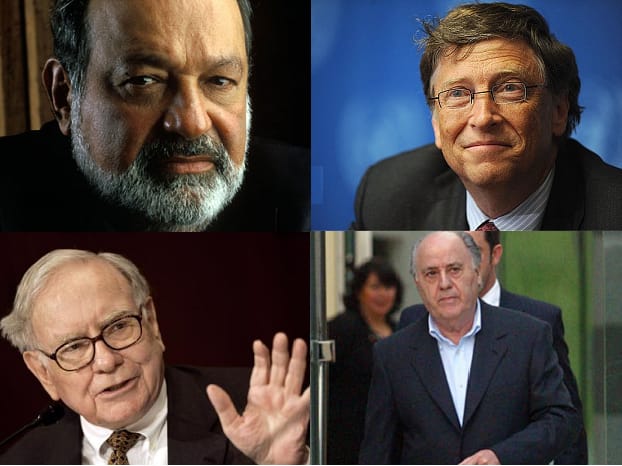 The world economies may be oscillating like a pendulum but billionaires of the world are laughing in the face of the recession.

Last year, the world’s billionaires with bottomless bank accounts saw an increase of $241bn to their collective wealth.

According the Bloomberg Billionaires Index, a ranking of the world’s 100 wealthiest individuals, Mexican infrastructure tycoon Carlos Slim remained the richest person on the planet for the third consecutive year.

But Slim wasn’t the biggest gainer in wealth last year. He was beaten by Amancio Ortega, founder of Spanish retailer Inditex. The 76-year-old tycoon’s fortune increased $22.2bn to $57.5bn as shares of Inditex, operator of the Zara clothing chain, rose 66.7%.

And of course there’s the Microsoft magnate Bill Gates who even after giving away $28m in 2012, increased his wealth by $7bn.

The other less fortunate ones include Facebook founder Mark Zuckerberg who lost $5.2bn in 2012 after the company’s share nosedived by 30% following its controversial IPO. However, that didn’t discourage the 28-year-old billionaire to donate almost $500m in Facebook stock to the Silicon Valley Community Foundation.

Coming in fourth, was the “Sage of Omaha” Warren Buffett with a $49.8bn wealth pile followed by Ikea founder Ingvar Kamprad with a $42.9bn fortune.

The top 10 richest people in the world

Industry: manufacturing, trading and investments, US

Industry: manufacturing, trading and investments, US