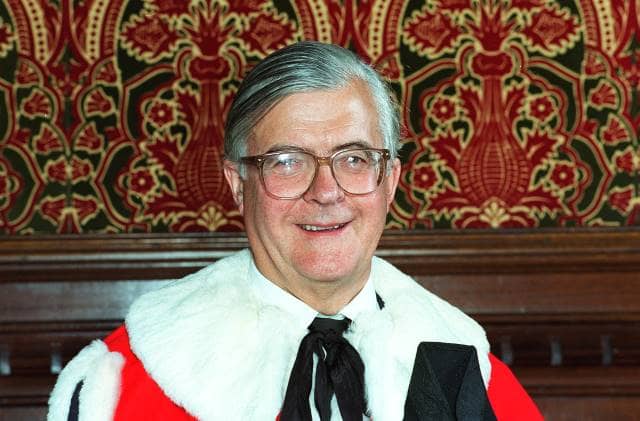 Conservative grandee, Lord Kenneth Baker has on Wednesday condemned Boris Johnson over his treatment of the Tory MPs that voted against the PM on Tuesday.

Lord Baker has called on the Central Office to allow 21 Conservative MPs, that includes Sir Winston Churchills grandson, Sir Nicholas Soames to be allowed to stand again at the next general election.

In a blistering statement Lord Baker said, “These 21 MPs are not parvenus seeking to infiltrate the party, they are lifelong Tories in their mind and in their bones.”

The former Tory Party chairman warned the Tories owe their success to being broad church that kept policy decisions away and out of the hands of “swivel-eyed ideologues.”

In a statement released to the PA news agency, Lord Baker said, “The threat of the deselection of Tory rebels has proved to be a blunt instrument and when blunt instruments don’t work, they tend to hurt the wielder more than the target.

“That is why in its long and successful history the Conservative Party has shrunk from using it.

“There was a sizeable group of MPs who opposed Margaret Thatcher, but I do not recall any being deselected.

“The success of the Conservative Party over 300-years is due to being always a broad church accommodating the diverse interests, concerns and views of individuals who nonetheless support the Party as an instrument for good government and for wise political change on the big issues of the time.

“During that time the Conservative Party has been successful in keeping the determination of policy away from swivel-eyed ideologues who are happier in movements rather than parties.

“It has never been left to the Whips Office to decide who should be a Tory or not.

“If the Conservative Party is to govern successfully, and I support Boris Johnson in his determination to leave Europe, reconciliation should be in the air.

“Speaking as a former Conservative Party Chairman, I would recommend to Central Office that any of the 21 rebel MPs who are actually selected by their local Conservative Association should be allowed to stand as the only Conservative candidate in the ensuing election.

“These 21 MPs are not parvenus seeking to infiltrate the party, they are lifelong Tories in their mind and in their bones.

“The local Conservative Associations are the active workers who should be trusted to support the people they know.