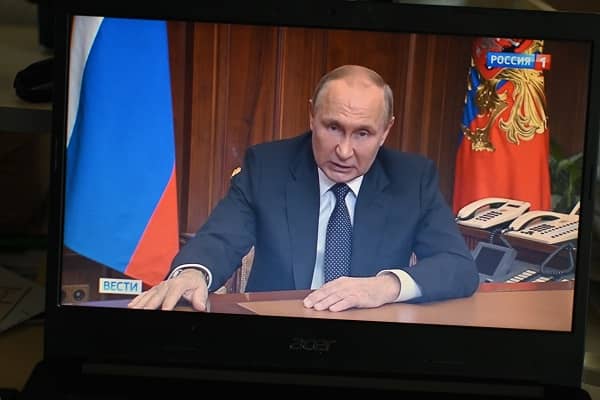 Perhaps, unsurprisingly, Vladimir Putin is most likely to be put on the naughty list by Britons in 2022 (61%). Around half say former President of the United States Donald Trump deserves to be on the naughty list (52%) while just over 4 in 10 (43%) believe former PM, Boris Johnson shouldn’t be getting presents this year.

Despite his best efforts on I’m a Celebrity… Get Me Out of Here! Matt Hancock is considered to have been naughty this year by 41% of Britons, the same proportion who say Liz Truss has behaved in the same way.

NHS staff maintain their position at the top of the nice list for the third year in a row (60%).

David Attenborough has been put on the nice list by 40% of Britons, while the same proportion think Paddington Bear belongs there as well after his appearance with the Queen in Jubilee celebrations and becoming a symbol after her death earlier this year.

After his help to save people money as the cost of living crisis really took hold, Martin Lewis has been put on the nice list by a third (34%) of Britons with only 1% saying he’s been naughty.

After their Euros win, the England women’s football team round-off our nice list top-5 with 30% saying they deserve presents this year.

Other notable nice people include President Zelenskyy of Ukraine (27%) while 23% put the latest I’m a Celebrity… Get Me Out of Here! winner, Jill Scott on the nice list. 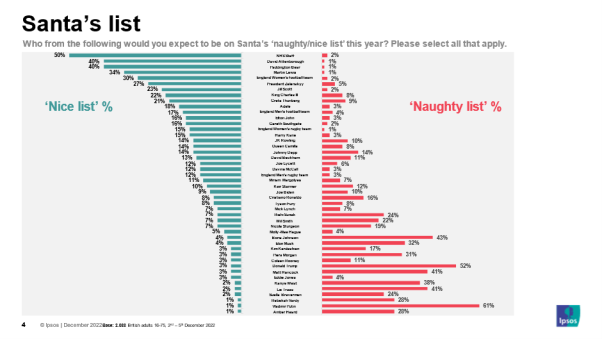 Ipsos Research Director Keiran Pedley said, “Whilst polls of this nature are just a bit of fun for the Christmas period, they do tell us a little bit about who the public like and dislike.

“NHS staff continue to be revered by the public as does David Attenborough, whilst Paddington Bear, Martin Lewis and President Zelenskyy reflect key events of the year.

“Given the continued support among Britons for Ukraine, Vladimir Putin’s numbers reflect just how unpopular he is in Britain.

“Meanwhile, Trump, Johnson and Hancock are no strangers to our naughty list, with Liz Truss breaking the top 5 after her ill-fated time in office this autumn.”