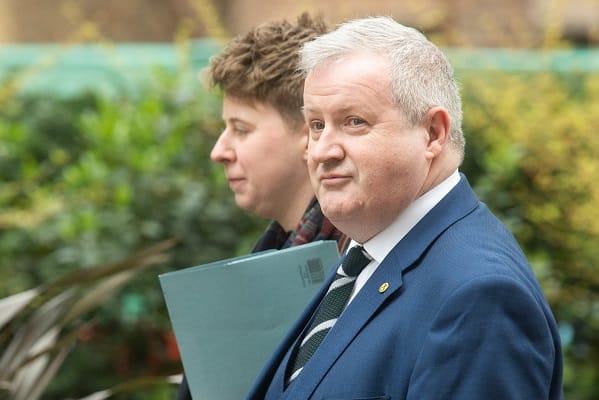 The Prime Minister faced a backlash from many MPs in the House of Commons on Monday afternoon and was called a liar by SNP’s Westminster leader Ian Blackford.

Blackford accused Boris Johnson of “misleading” MPs and further accused the Prime Minister of “lying” over the partygate fiasco.

Blackford said, “So here we have it. The long-awaited Sue Gray report, what a farce.

“The Prime Minister has told the House that all guidance was completely followed, there was no party, Covid rules were followed and that ‘I believed it was a work event’.

Blackford added, “He’s being investigated by the police, he misled the House. He must now resign.

“I am standing up for my constituents that know this Prime Minister has lied and misled the House.”

The Speaker of the House Sir Lyndsay Hoyle demanded that Blackford immediately withdraws his comments at least three times.

However a defiant SNP leader renewed his blistering attack on Johnson and was then kicked out of the Commons by the Speaker.

The Speaker asked Blackford had he withdrawn his claims that Johnson had “misled” the House.

Blackford replied, “That the Prime Minister may have inadvertently misled the House.”

The Speaker blasted, “To help me help the House, you’ve withdrawn your earlier comment and replaced it with inadvertently?”

The Commons was filled with raucous shouting from the Tory benches, Sir Lindsay then told the Commons, “Under the power given to me by standing order number 43 I order the honourable member to withdraw immediately from the House.”

However, Blackford walked out the chamber then the Speaker said, “It’s all right, we don’t need to bother.”