CLICK HERE TO WATCH THE FULL VIDEO
Home Business News Hero WWII veteran, 99, raises £12m for NHS and is a ‘beacon of hope for people’ 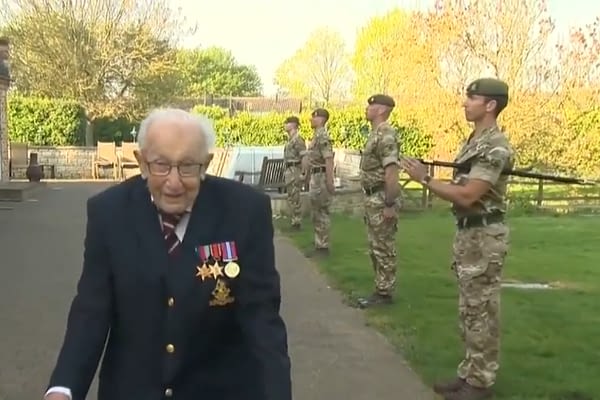 Captain Tom Moore, 99, who is a World War Two veteran has raised over £12m for the NHS by walking laps in his garden.

Captain Moore turns 100-years old at the end of month initially wanted to raise £1,000 by walking 100 lengths of his garden.

Captain Moore was met with a guard of honour from the 1st Battalion of the Yorkshire Regiment. He said he feels “fine” and he was happy to be “surrounded by the right sort of people.”

Captain Moore previously told Sky News during a break from his walks, “We set out originally to raise a little bit of money by me walking up and down 100 times in reference to my 100th birthday.

“But if I’ve done the 100 by tomorrow, I’ll have to continue past my birthday, which won’t matter because I’ll continue walking while people are contributing money to a marvellous fund for the NHS.”

NHS workers, politician and sports personalities are calling on Captain Moore to be knighted. “It would be marvellous to have such an honour, but I don’t expect anything like that,” he told the BBC.

“I think it would be absolutely enormous, Sir Thomas Moore, have you ever heard such a thing.”

Donations are continuing to pour in and can be given at the just giving website.

In a message for all NHS staff working through the coronavirus crisis, Captain Moore said, “You’re doing a marvelous, marvelous job.”

He added: “Please remember that tomorrow is a good day and we shall all get through it in the end.”

His daughter Hannah Ingram-Moore said she was proud “beyond words” of his amazing achievement.

She said, “I think he has become a beacon of hope for people.”

Captain Moore said, as the coronavirus pandemic drags on he is looking to the past for inspiration to feel positive about the country’s future.

He said: “We’ve fought so many battles and we’ve always won and this time we’re going to win again.”