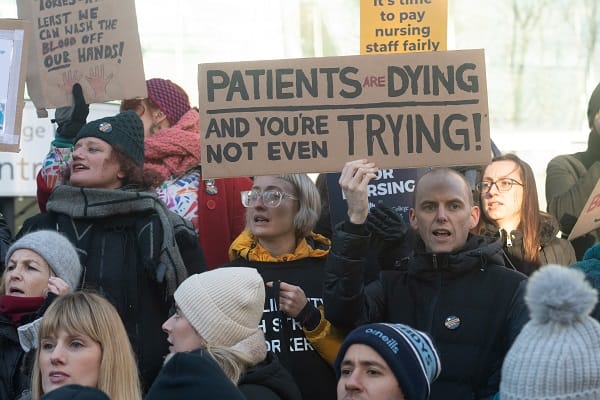 The government are showing no signs of reaching a solution and health leaders are making contingency plans for what could be “the biggest day of industrial action the NHS has ever seen.”

Health chiefs are warning that this “is a huge concern” as ambulance staff are now to walk out in coordinated strikes.

On 6 and 20 February, 6 and 20 March, more than 10,000 ambulance workers, including paramedics, emergency care assistants and call handlers will all walkout the GMB union has confirmed.

Nurses will also strike on 6 and 7 February which will cause mass disruption across the NHS, and it will be the first time the Royal College of Nursing (RCN) will have taken strike action on the same day.

Saffron Cordery, interim chief executive of the NHS Providers organisation, said, “Trusts have been warning for months that coordinated strikes were a possibility if the Government and unions failed to reach an early agreement on this year’s pay award.

“The prospect of ambulance workers and nurses striking on the same day is a huge concern.

“It could be the biggest day of industrial action the NHS has ever seen.

“Nobody in the NHS wants more strikes, including staff joining picket lines.

“Trust leaders understand why overstretched staff have reached this point amid chronic staff shortages and ever-growing demand and pressure.

“We need ministers to get round the table with the unions urgently to deal with the key issue of pay for this financial year, otherwise there is no light at the end of the tunnel.”

Matthew Taylor, chief executive of the NHS Confederation, added, “This escalation takes us deeper in to the situation NHS leaders have been warning against – a war of attrition between the government and unions spanning several months at a time when NHS services are seeing unprecedented pressures.

“Health leaders will now be intensifying plans and preparations for the combined strike of nurses and ambulance workers next month, which will pose a more significant challenge to services than the industrial action we have seen to date.”

Speaking to broadcasters at a police station in London on Wednesday, Prime Minister Rishi Sunak said, “We’re very keen to have a constructive dialogue, not just with the nurses’ union, but with unions across the public sector.

“At the beginning of the year, the Government wrote individually to all public sector unions inviting them in to have talks with their relevant ministers.

“I’m pleased to say that those talks are ongoing and we’re keen to find a constructive way forward and bring these strikes to an end.

“Of course I understand the impact they’re having on people’s lives and I understand why people are frustrated.

“But we do also need to make sure that those conversations are based on what’s reasonable, what’s responsible for the country as we tackle inflation, which is good for everybody if we can get that down as quickly as possible, but also what’s affordable.”

He added, “As we tackle inflation, we need to be responsible with public sector pay settlements, we have to think about what’s reasonable but also what is affordable for the country.

“The Government and all ministers are sitting down, not just with the nurses’ union, but with all unions to have constructive dialogue and find a way through and we’re committed to making sure that we can also reduce the burden of the cost of living on people.”