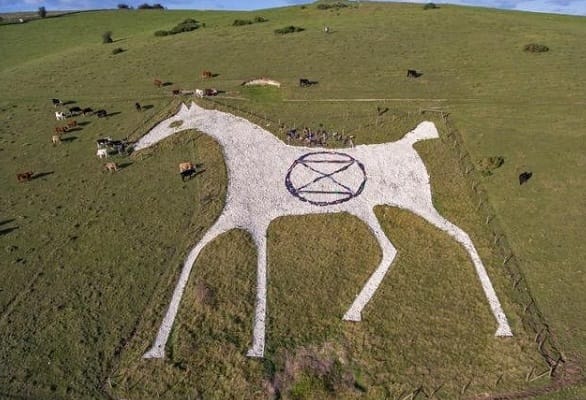 Extinction Rebellion (XR) have gone too far as they have vandalised the famous Alton Barnes White Horse in Wiltshire which is 200-year old British Landmark.

The climate change protest group have covered the centre of the horse with a huge XR logo. The chalk horse was cut into Milk Hill in 1812, the white figure can be seen for 22 miles on a clear day.

BBC Wiltshire posted the image on Twitter saying, “An Extinction Rebellion logo has been put on the Alton Barnes White Horse by climate change campaigners in Pewsey.”

People took to Twitter with their disgust and one person simply wrote, “Vandalism.”

Another person said, “They aren’t ‘campaigners’, they are lawbreakers, vandals and bullies. Most people who campaign do so peacefully, within the law -seeking change by arguing the merits of their beliefs. This is a rabble of ill-informed puppets.”

“But if you think messing with a landmark is bad, just WAIT until you hear about what humanity’s doing to the environment!”

Thousands of protesters have taken to the streets across Whitehall on Monday causing havoc for commuters as may roads and Lambeth and Westminster bridges are blocked.

Extinction Rebellion spokeswoman Zoe Jones said, “We’re here to pressure the government into action because we can’t wait any longer.

“The next two weeks will involve marches and family-friendly events, there’ll be some spicier actions as well and some will be arrestable.”

She added, “The public perception of XR is that we’re disrupting ordinary people’s lives by blocking roads and that’s why this time we’re taking our protests to the seat of power and taking it to Westminster.

“We are on the public’s side and we are ordinary people who are extremely concerned.”

XR has said they are expecting more than 30,000 people to protest over the next two-weeks to demand that government commits to reducing carbon emission to net zero by 2025.