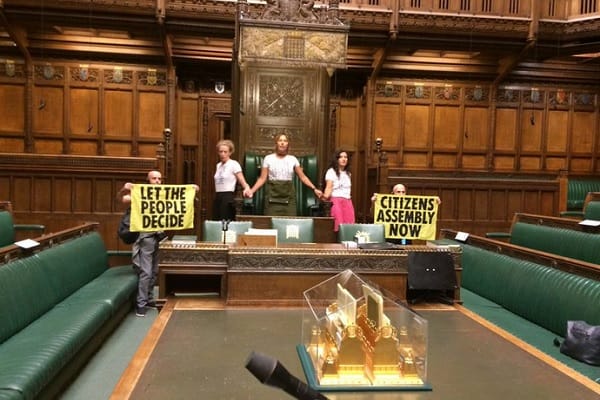 Extinction Rebellion have stormed Parliament on Friday and glued themselves to the Speaker’s Chair with two other standing beside them holding up banners saying “Let the people decide” and “Citizens” assembly “Now.”

BREAKING NEWS: Extinction Rebellion supporters have superglued around the Speakers Chair inside the commons chamber.

Right now inside Parliament a speech is being read out demanding a Citizens' Assembly Now: “We are in crisis. We can not afford to carry on like this…" pic.twitter.com/JqKBasRaCH

The group said in a statement, “Extinction Rebellion have dropped banners across The Palace of Westminster, including off the building.

“The protest points to the need for a Citizens’ Assembly to cut through the corruption in Westminster, update politics and let the people decide.”

How in the world did XR even get into the House of Commons to glue themselves down?

The protestors said whilst reading out a speech in the Commons that they are demanding for immediate action on climate change.

They said, “We are in crisis. We can not afford to carry on like this.”