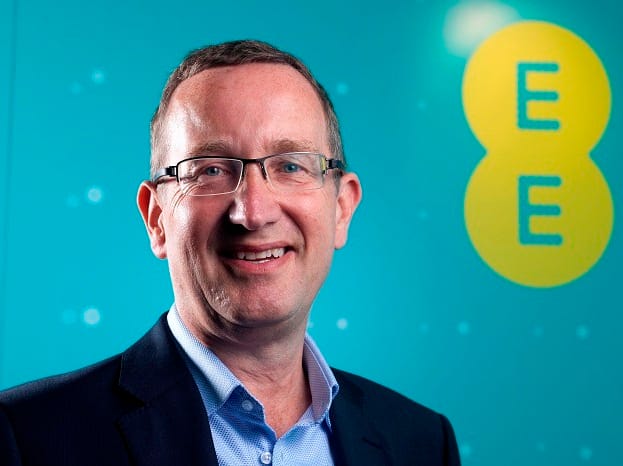 EE by gum! 4G (almost!) launches. Q&A with the man making it happen

Martin Stiven, vice president, business to business, EE says you can use 4G devices by Christmas

4G fans were left slightly disappointed today as UK’s largest mobile operator Everything Everywhere launched its 4G network…not with working phones but with a timetable for when it will be switched on.

In December, 16 UK cities including London, Edinburgh, Cardiff and Belfast will have 4G networks live and kicking. EE will sell 4G devices through a fleet of 700 branded stores.

The oddly named firm, run by the oddly named Olaf Swantee, also announced it was launching the new 4G network under its new brand EE.

Present at the press conference at Science Museum was London mayor Boris Johnson who hailed EE for bringing 4G networks to London and poked fun at their “pollen count dot” new corporate imagery.

EE confirmed that it’s launching 4G on the Samsung Galaxy SIII LTE, Nokia Lumia 920, Nokia Lumia 820, The HTC One XL, Huawei Ascend P1 LTE and  Huawei E589 Mobile WiFi. There were smirks and winks at every mention of the iPhone 5 coming with the 4G feature yet the EE team didn’t make any confirmations. (Read the full story: It’s GGGGreat! How 4G is turbo-charging the iPhone 5)

We’ve all heard about 4G’s multifarious advantages to the consumer but will it actually be as fast as promised? Will upgrading to 4G burn a hole in the market? We caught up with Martin Stevin, VP of business to business, EE. to find out:

Q. So Martin, by now we all know that 4G means faster internet but what are the speeds we’re looking at?

A: Well, we’ve got to be very careful with speeds because there are theoretical speeds and then there are average speeds. The theoretical maximum of 4G is nearly 108Mbps per second, but the average speed you’d probably get is up to 40Mbps which is up to five-times faster than average 3G speed.

Q. Why should a business consider upgrading to 4G?

4G will enable businesses to set up an office or a pop-up shop anywhere. With the Huawei E589 Mobile Wi-Fi, they can get high-speed connectivity instantly and they have the option of adding up to five Wi-Fi devices to that. Other than that, people on the move will get the option of downloading files or access data-hungry applications. We’ve had a successful trial with Cumbrian businesses where internet connections are known to be very poor and businesses are loving it there.

Q. Sounds great! But we got in touch with businesses which’ve trialled the EE’s 4G networks and they insisted that they would upgrade only if they get it at reasonable prices. So will 4G come at a premium, will it be a luxury service?

We’re not announcing prices yet but we know for a fact that this will be a mass-market product that will be available to all, it won’t at all be a high-priced premium product at all. The 4G roll out is about driving a lot of customers to it very quickly. You’ll see the prices soon, I’m sure you won’t be disappointed.

Q. With 4G you’d find the average bloke tweeting, posting on Facebook and downloading much more, will the cell towers be able to take the pressure?

One of the big things we’ve been doing in the last six months is scaling the network with huge amounts of backhaul (part of cellular towers), significantly more than any other network in the UK to make sure that we can shift big pieces of data around the network. We’ve been enhancing cell sites and upgrading them to be 4G capable.

If you look at the four cities where we’ve turned it on today, our engineers are testing it a lot to make sure we get the balance right. Clearly, there will be a lot of data, voice calls, texts et al but we’re paying guys in the technology team a lot to make it work.

Q. What about battery life?

Manufacturers are definitely taking that into account. What we do recognize is the new world would be data-hungry so any propositions that we put forward will have to come up with solid battery life.

Q. When 3G launched in the UK back in 2001, it took quite a while to cover the whole country. How long will 4G take?

Well, we’ve announced that we want to cover 98% of the UK by 2014. We want to be fast and bold and will make no delay in rolling it out quickly. We know that there is a pent-up demand for it, we know businesses and consumers alike want this service, we know speed, in both the network and making the service available, is the essence. We’ve all seen how smartphones are becoming phenomenal computing devices, we know that people want to connect. Facebook, Twitter and other apps is what they want, and EE launching 4G is the final piece in the jigsaw. It’s a real step forward.

Infographic of the week: Free Wi-Fi – friend or foe