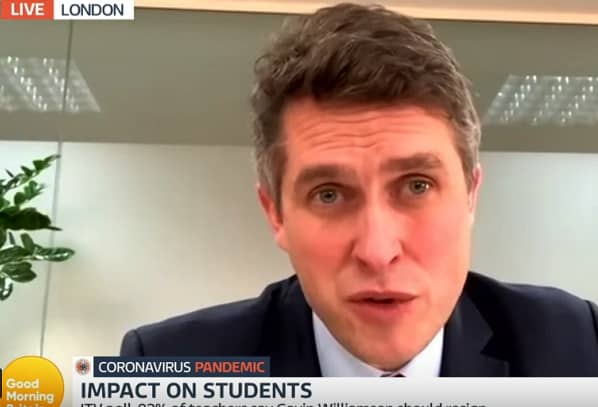 The Education Secretary, Gavin Williamson has been called “incompetent” and accused of failing children through the pandemic and he should resign.

Piers Morgan slammed Williamson on Good Morning Britain (GMB) and demanded that he should “own” to being a “catastrophe.”

Susanna Reid joined in as the Education Secretary ignored the questions, and she reminded him of his damaging U-turns.

She ripped into Williamson and said that last years A-level results was a fiasco that saw 40% of teacher assessments downgraded.

She said, “They lost out on future life chances at the universities they wanted to go to.

“Back in December, you told schools they needed to stay open, even threatening legal action against them, and then come the new term you decided that schools needed to be closed.

“Still half a million haven’t got laptops to access online learning, and they still have no idea how their exams are going to be assessed.”

Piers asked him, “a straight question.”

“Have you offered your resignation to the Prime Minister at any stage of this pandemic, yes or no?”

Williamson ignored the question and said, “Our focus, my focus is making sure children get the best remote education.”

Williamson was asked again if he has offered his resignation, but he continued about his “focus.”

Losing patience Piers asked, “is there a problem on the line, can you not hear me?

“Mr Williamson, you seem to be totally ignoring me.”

Piers slammed the Education Secretary and added, “Given the level of failure in your reign as Education Secretary during this pandemic, given that 92% of teachers in England want you to go, given you are described by the Labour Party and Liberal Democrats as the worst Education Secretary in history, I simply ask you, have you looked in the mirror and thought ‘you know what I’ve done a terrible job, I’m going to say to the Prime Minister it’s time for me to step aside and let someone more competent take over’.”

“Have you had that conversation with yourself and the Prime Minister?”

Yet again Williamson refused to answer any questions and replied with, “Piers, my onw focus is to deliver the very best for all children.”