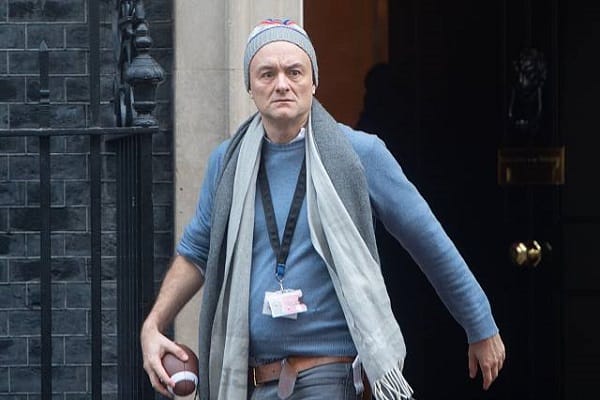 Cummings accuses Boris of ‘falling below standards of competence and integrity’

Dominic Cummings who is the former adviser to the Prime Minister and who was his close confidant until he was ousted in a power struggle is threatening revenge on Boris Johnson.

Cummings has revealed he has bombshell document which will reveal Johnson’s lockdown strategy which could severely damage the PM.

For reasons unknown at this stage Cummings wrote an avalanche of erratic posts on Twitter this morning and said that he holds the “only copy of a crucial historic document” over Johnson’s decision making of the pandemic.

Cummings also slammed Johnson over “our joke borders policy” making reference that the Prime Minister was too slow to ban all flights from India.

This  has now seen a worrying spike in the Indian variant across the UK, which has so far claimed four lives and infected more than 2,300 people which has doubled in a week.

In April Cummings wrote a 1,000 word blog and accused him directly of “falling so far below the standards of competence and integrity the country deserves.”

Next week Cummings will appear before the all-party Health and Social Care and the Science and Technology committees to give evidence of the government’s handling of the pandemic.

It is expected that Cummings will try to totally ruin the Prime Minister in what could be a blockbuster appearance in front of MPs next week.

At around 11am this morning Cummings wrote a tweet which he later deleted and said, “I’ve got the only copy of a crucial historical document from covid decision-making.

“Should I 1/ give it to the Cmte next week / put on blog, b/ auction it as an Ethereum NFT & give the ETH to a covid families charity?”

Underneath the tweet he is asking the public to vote if Cummings should give the original historic document to either the “Committee/blog” or “Ethereum NFT + charity.”

Cummings later wrote that he will now give the “crucial historic document” to the Committee next week after doing his poll on Twitter.

He wrote, “Did 1st twitter poll, botched options like idiot so scrapped… My point was *as well as* giving to cmte I cd also raise £ for a charity – not instead of – but I botched it… *Obviously* I’ll give to cmte Wed…”

The Prime Minister’s former adviser has also blasted the government over the handling of Brexit and called is a “catastrophe.”