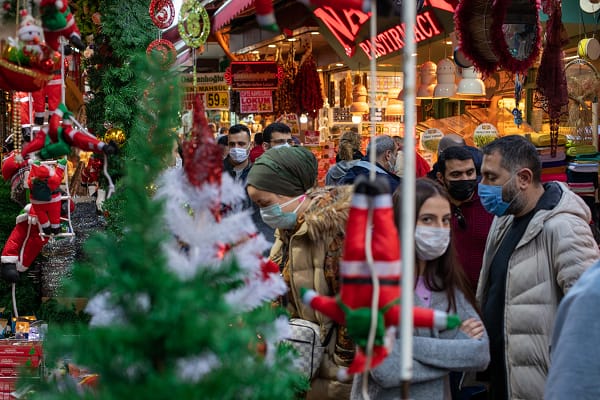 It’s that time of the year. Every TV advert and supermarket visit reminds us that we should already be planning for Christmas. As we set about organising food, presents and parties, we should also be planning how to survive the season, says a leading health testing expert.

Dr Quinton Fivelman PhD, Chief Scientific Officer at London Medical Laboratory, says: ‘Christmas is widely considered to be a joyful and relaxing time, but for many it’s anything but. The Office for National Statistics (ONS) says December and January are the most common months of death in the UK.

‘Surprisingly, the highest concentration of cardiac-related deaths is during Christmas time. Some distinctly unfestive research published in the US journal “Circulation” shows that 4% more people die of heart problems during the Christmas holiday compared to even the mid-winter average. Most fatal of all is Christmas Day. It has the highest number of cardiac deaths that occur rapidly after presentation of a medical problem. In second and third place are 26 December and New Year’s Day.

‘It used to be thought that the primary reason for the higher number of UK Christmas deaths was the cold weather. However, Los Angeles, a Californian city with very mild winters, also has a third more deaths at Christmas. Furthermore, although Australia and New Zealand both celebrate Christmas in their mid-summers, there’s a marked rise in deaths at this time of year.

‘So, if it’s not just the cold weather that’s responsible, what are the main reasons why Christmas and New Year prove fatal, and what can we do about it?

‘The UK’s winter peak in deaths from cardiovascular disease is likely to be linked to high cholesterol and high blood pressure; both are known to climb around the holiday season for many people.

‘Strong evidence suggests that rich foods, alcohol and restricted access to hospitals results in a higher frequency of heart attacks during the festive season.

‘Additionally, many of us travel to see friends and family and that may present problems. While people are holidaying away from their main medical facilities, they may try to put off presenting to a doctor until they return home. That delay can prove fatal.

‘There are a number of other medical reasons why UK deaths climb during Christmas and New Year. Many of us have lower vitamin D levels now than at other times of the year. From around late March to the end of September, our body creates enough vitamin D through exposure to direct sunlight absorbed on our skin. However, from October to early March we do not make enough naturally. Vitamin D deficiency is associated with increased incidence and risk of heart attacks. For this reason, many people take vitamin D supplements. If in doubt, it’s a good idea to have a vitamin profile blood test.

‘It’s not just rich foods, excess alcohol and grey winters that can trigger heart attacks, however. The stress of meeting relatives we’ve been avoiding for the previous eleven months may also be causing us harm. Another worry is the cost of the presents, parties, food and booze. That will be a particular issue this year, as household costs soar. A ground-breaking 2017 study published in “The Lancet” revealed that there’s probably a direct link between stress and heart problems. It tested activity in the amygdala, a region of the brain associated with stress, and discovered that those people with the most activity in the amygdala had the highest risk of developing heart disease over a follow-up lasting nearly four years.

‘Finally, it’s perhaps not generally known that a bad case of flu can also have an impact on our heart. There is a known link between the flu virus and cardiovascular disease.

‘The flu virus affects inflammatory and blood-clotting pathways. This can cause fatty deposits on the artery walls (plaques) to break loose, leading to coronary artery blockage – the main cause of heart attacks. We are far more likely to catch flu during the winter, together with Covid-19 and respiratory syncytial virus (RSV). RSV is a virus that infects the upper and lower respiratory tract, causing about 14,000 hospital admissions and 8,000 deaths in the UK annually.

‘Knowing all these issues, what preventative actions can we take to get us through Christmas? Obviously, going easy on fatty foods and alcohol is the single most significant step. Additionally, if people know they are not in the best of heart health, they may want to consider access to GPs and hospitals before deciding to travel. A heart health blood test might also be a sensible precaution. London Medical Laboratory’s Heart Health Profile test can be done either at home or at one of over 85 selected pharmacies, drop-in clinics and health stores that offer these tests across London and nationwide.

‘In terms of reducing stress, the encouraging takeaway from the Lancet study is that stress reduction techniques, such as exercise and deep breathing, might calm the mechanism that converts stress to heart attacks and strokes.

‘Finally, knowing that the flu can trigger heart-related events, the introduction of London Medical Laboratory’s new rapid PCR test, that detects whether your symptoms are caused by Covid, flu and/or RSV, is timely. The revolutionary new “Covid, Cold or Flu A & B, 4-in-1 PCR Test” can be taken at one of over 85 selected pharmacies, drop-in clinics and health stores nationwide or, for convenience, at home through the post.’

Expert advises do not lose track of your Christmas orders...

Nearly half of Brits vow to ‘shop small’ more this...