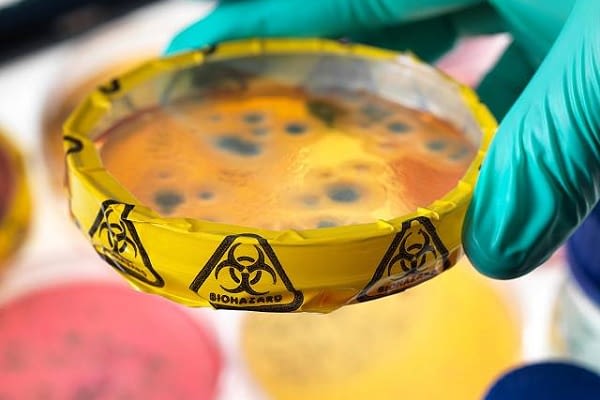 A high security Chinese laboratory close to the epicentre in Wuhan which houses many deadly pathogens have broken seals on fridge doors images show.

A refrigerator which holds around 1,500 different viral strains, one of which is a bat coronavirus strain has a broken seal, which is linked to the pandemic.

The state-owned China Daily newspaper released images showing broken seals on fridges in 2018, and were then released a second time in March, which were later deleted.

An image released by the Express which has been re-tweeted shows a worker at the Chinese lab pulling out a flimsy box containing deadly viral strains.

The Wuhan Institute of Virology holds 1,500 virus strains, including the new coronavirus which has infected millions of people around the world. Pictures from the secretive laboratory show a broken seal on one of the fridge doors.
– News Source: express UK pic.twitter.com/yaNU5IZUMl

Wuhan, China has a level four biological laboratory, BSL-4, which is the highest-level pathogen lab in Asia containing some of the most dangerous diseases in the world.

Previously George Gao, director of the Chinese Academy of Sciences Key Laboratory of Pathogenic Microbiology and Immunology in Beijing said, “Our contribution on the BSL‑4-level pathogens will benefit the world.”

Ironically the Wuhan Institute of Virology had scientists undertaking experiments on Horseshoe bats which is where it is strongly suspected coronavirus originated from.

A scientific study written by a group of Chinese scientists from the South China University of Technology broke cover and claim coronavirus spread from the high-security Wuhan science laboratory, and not a “wet market.”

Biologists Botao Xiao and Lei Xiao, contradict a report that the coronavirus pathogen first made the jump from bats to humans in the Wuhan wet market.

They said, “The probability was very low for the bats to fly to the market.

“According to municipal reports and the testimonies of 31 residents and 28 visitors, the bat was never a food source in the city, and no bat was traded in the market.

“There was possible natural recombination or an intermediate host of the coronavirus, yet little proof has been reported.”

The biologists published a pre-print entitled “The possible origins of 2019-nCoV coronavirus.”

The British Medical Association (BMA) said that “genetic bioweapons to target certain ethnic groups is a possibility,” according to the Guardian in 2004.

The BMA added that problems in advances in science for things such as “treatment to Alzheimer’s and other debilitating diseases could also be used for malign purposes.”

Scientists warned in 2005, in the official view of the International Committee of the Red Cross (ICRC), there is “The potential to target a particular ethnic group with a biological agent is probably not far off.

“These scenarios are not the product of the ICRC’s imagination but have either occurred or been identified by countless independent and governmental experts,” said Jacques Forster, Vice President of the ICRC.