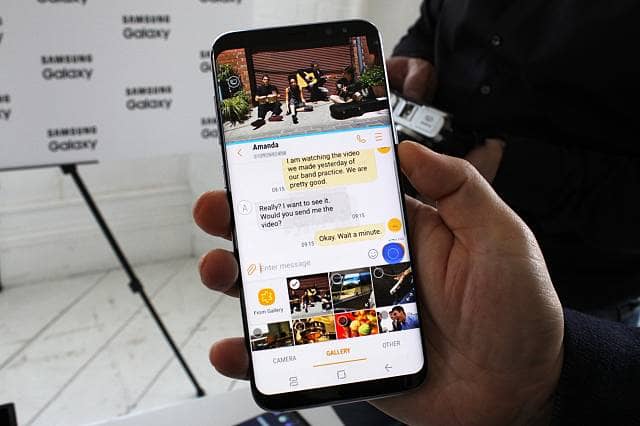 What’s this all about?

Here’s what Geoff Blaber had to say:

“In a market where consumers are becoming increasingly numb to indistinguishable smartphone launches, Samsung is redefining expectations with the Galaxy S8 and S8+”

“The Galaxy S8 is arguably the most important launch of the last 10 years for Samsung and every aspect will be under the microscope following the Note 7 recall. TheS8 is a unquestionably a strong product but Samsung must now deliver a faultless launch to move on from the difficulties of 2017. If this happens it will emerge in an even stronger position.”

“With the Samsung Galaxy S8 breaking design boundaries and with high expectations for a significant upgrade to the iPhone to mark the product’s 10th anniversary, 2017 could be the year that sees smartphones emerge from an innovation slumber”

“Samsung has clearly opted to design and innovate its way out of a challenging 2017. The almost ‘bezel-less’ design and other leading edge features of the Galaxy S8 underline this. If Samsung can deliver a faultless Galaxy S8 launch there’s every indication that the Note 7 recall will have little lasting impact on consumer sentiment”

“Hardware design plays a big role in attracting the customer but it’s software and services that keeps them. The latter has long been Samsung’s Achilles heel so the additions such as the Bixby voice assistant and the artificial intelligence engine behind it will be key to Samsung’s future success.”

“In the past it has felt like Samsung has added in features and technologies purely to have the most comprehensive spec list in the market. With the S8 Samsung has taken a far more thoughtful approach to delivering a complete product with features that add value for consumers.”

“The new Gear 360 makes capturing and sharing 360-degree photos and videos easier than ever. With seamless sharing on Facebook and YouTube the potential for so-called ‘surroundie’ content is greater than ever.”

“The decision to make the new Gear 360 compatible with a wide range of other Android devices and the iPhone underlines Samsung’s desire to help promote 360-degree content capture and sharing as widely as possible.”

“Beyond the S8, Samsung is building a compelling range of additional accessories such as the its Gear smartwatches, Gear 360 camera and Gear VR headset which all serve to enhance consumer perceptions of the S8 as a complete package.”

“The ability to connect the S8 via a dock to a screen, keyboard and mouse is extremely impressive. Although Microsoft has done this in the past the performance of the S8 makes it a very compelling experience.”