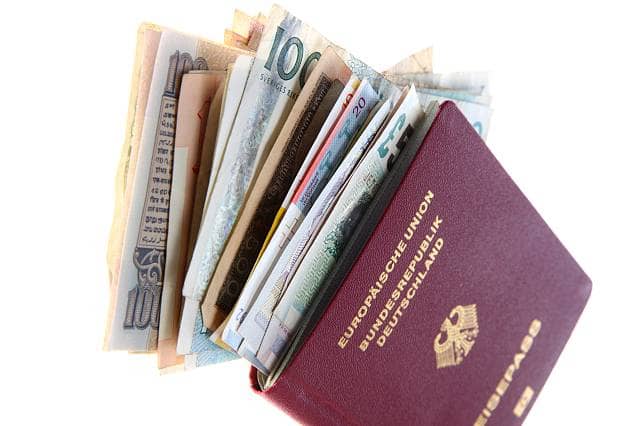 With Easter approaching and as millions of Britons prepare to travel abroad for the first time this year,  a joint study by Travel Money Club and the University of Wolverhampton has revealed that £1.15 billion is added to foreign exchange rates in the form of hidden fees, commissions, transaction charges and mark-ups before it reaches the pockets of British holidaymakers.

According to the Office for National Statistics, £66.3 billion is spent on foreign currency during visits abroad each year; 75 per cent of this is exchanged in UK banks, bureaux de change, travel agents, supermarkets and Post Offices before departure. But hidden margins, charges and commissions mean that Brits spent £40 billion buying the 20 most popular currencies rather than the £38.85 billion it would have cost with Travel Money Club.

People face paying as much as £200 extra when exchanging £2,500, with rates varying on different currencies from the same provider by as much as 6.25 per cent and travel agents offering some of the poorest retail rates available.

Research also found that 90 per cent of travellers admit to getting their currency from a regular source, with less consideration for getting the best deal. 85 per cent believe that there is minimal difference in fees and charges between providers.

This lack of awareness in charges resulted in almost all (98%) travellers considering convenience among their most important factors when buying foreign currency. Travellers who do shop around spent an average of just 12 minutes comparing conversion rates before purchasing.

In light of the findings, Travel Money Club is lobbying for greater transparency in the pricing of retail foreign exchange to allow those travelling abroad to make a more informed choice about where to buy their travel money and how to benefit from the best rates. Currently foreign exchange rates are packed with stealth charges, making it difficult for travellers to understand which providers offer the best value.

Don Clark, Founder of Travel Money Club, said: “The truth is that foreign exchange is still a wild west when it comes to retail regulation, with no restrictions on what can be charged to consumers and how much can be added in the form of hidden fees and charges. This results in hugely different prices between providers, and even across branches of the same company. Leads and lags are also commonplace, with delays in publishing better rates, and the accelerating of poorer rates ahead of market drops, inflating profits for retail currency exchanges – a similar pricing strategy to the one used by petrol stations when oil prices fluctuate.

“We want to lead the way in campaigning for fairness and transparent pricing, so consumers properly understand their options and can make an informed choice. We look forward to the day when all businesses, whether commercial or retail sellers in the foreign exchange sector, follow suit. Following Ofgem’s introduction of regulatory guidance for home energy providers, we encourage the retail travel money and exchange sector to follow suit, bringing transparency to British customers.

“We would eventually like to see all retail foreign exchange providers quoting the market rate and disclosing their fees and commissions separately, so the customer has full clarity in what they’re paying and where their money is actually going. This would also eradicate the exploitation of fluctuating exchange rates and see the ordinary person in the street covered in the same way as commercial currency providers.

“The latest extension of the ‘Markets in Financial Instruments Directive’ (MIFID) incorporated commercial currency, stocks, bonds and commodities, but we need another extension to specifically address retail foreign exchange trading so Brits get the best deal possible ahead of their holiday. Hopefully this research will help start the discussion of how we achieve a fairer marketplace.”

Travel Money Club is the brainchild of Don Clark, who previously had success applying a transparent business model to financial products, including Personal Equity Plans (PEP) and Individual Savings Accounts (ISA). Don lobbied the Government and campaigned to rid the industry of unfair fees and charges providing consumers with a fairer deal.

Dr Asia Alder, Senior Lecturer in Leisure Industries at the University of Wolverhampton said: “The findings demonstrate some significant price variances in the rates offered by retail currency providers, with retailers making different rates of profit on different types of currency. Adding greater transparency to this industry would help consumers make a more informed choice about where to buy their travel money and the best rate for individual currencies, rather than masking the price of the currency as the market rate.