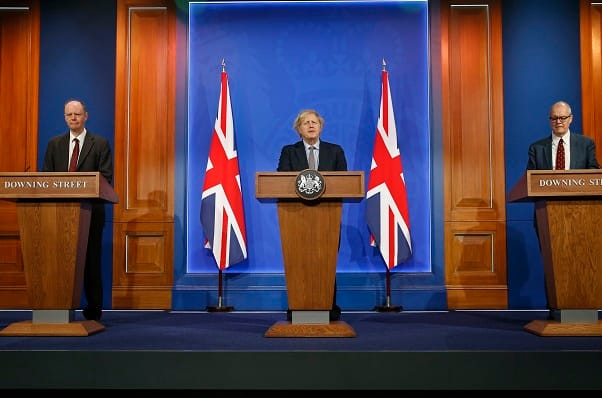 The Prime Minister will address the nation this evening and will be joined by Professor Chris Whitty and Sir Patrick Vallance, the chief scientific advisor.

It is expected that Boris Johnson will announced the final stages of easing restrictions will be delayed  by up to a month.

What has been dubbed “Freedom Day” could be pushed back by four weeks to prevent thousands being hospitalised as the Indian variant is now responsible for 96% of new cases.

It is understood that the government could introduce a “mix and match” approach which will see some restrictions lifted rather than everything all at once.

Last week a senior government official told the Financial Times, that a “mix and match approach is probably on the cards” to prevent another wave of high infections.

The source also said that nightclubs could stay closed for “a while” and weddings will continue to go ahead with regulations slightly tweaked.

Johnson told Sky News, “It’s clear that the Indian variant is more transmissible and it’s also true that the cases are going up, and that the levels of hospitalisation are going up.

“Now, we don’t know exactly to what extent that is going to feed through into extra mortality, but clearly it’s a matter of serious, serious concern.”

Last week, Public Health England (PHE) warned that cases of the Indian variant are rapidly building up with almost 30,000 infections in the last week in the UK.

In total there have been 42,323 cases recorded by PHE in total, whilst more than 90% of cases are of the Indian variant, known as Delta.

The Delta variant is around 60% increase of household transmissions, new research suggest, which is also a sig that the Indian variant is spreading our of control across the UK.

The Health Secretary said on Thursday that the Indian variant now comprises of 91% of Covid cases in the UK.

Dr Hans Kluge of the World Health Organization (WHO) warned that the Indian variant, had shown signs of being able to evade some vaccines.