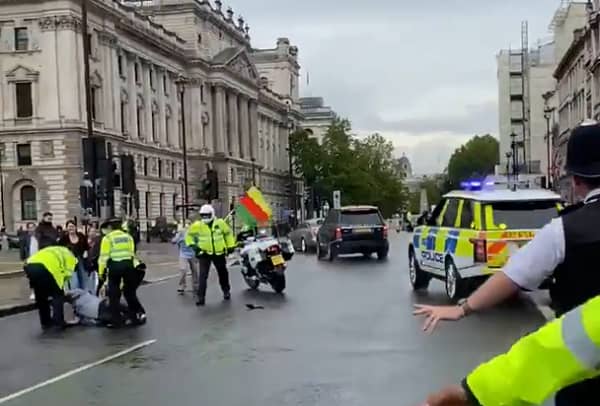 Prime Minister Boris Johnson’s car was hit by a security vehicle after his car came to sudden stop as a protestor jumped in front of the car.

Johnson’s security car which is a silver Jaguar could be seen with a huge dent in it from when the black Range Rover hit his car.

The incident took place outside Parliament on Wednesday afternoon as the protestor “ran out into the road.” The protestor has been arrested.

The incident was captured on video by an anti-Brexiteer who said, “Boris Johnson in car crash at Parliament. Just now.

Bois Johnson in car crash at Parliament. Just now. Security drives into back of his car as Kurdish protester runs into road. pic.twitter.com/k1kCplzyZ5

“Security drives into back of his car as Kurdish protester runs into road.”

A Number 10 spokesman confirmed the car was  Johnson’s, he added, “I think the video speaks for itself as to what happened.

“No reports of anybody being injured.”