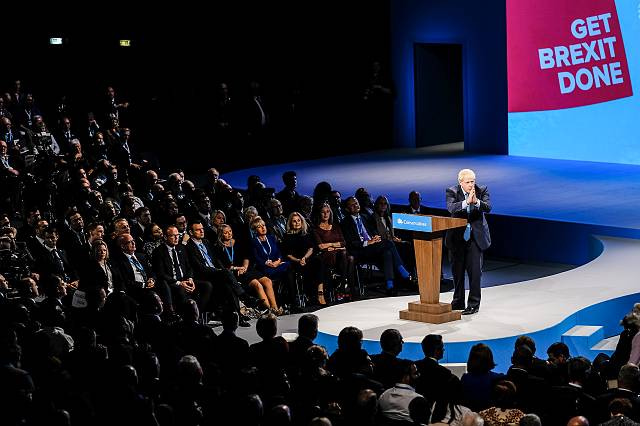 Boris Johnson the prime minister delivered a series of jokes rather than outlining new policies at his Tory conference speech in Manchester on Wednesday.

The conference was alight with laughter as Johnson gave fish gags of Nicola Sturgeon and Alex Salmond and said that John Bercow was dinning on testicles.

He said he wants to take back control of the fisheries in Scotland and said, “It is one of the many bizarre features of the SNP that in spite of being called names like Salmond and Sturgeon they are committed to handing back control of those fish to the EU.”

In another pun to fish he added, “We want to turbo-charge the Scottish fishing sector, they would allow Brussels to charge for our turbot.”

Speaking about paliament Johnson joked, “If Parliament were a laptop, then the screen would be showing, I’m afraid, the pizza wheel of doom.”

If parliament were a school then Ofsted would close it down.

He added, “If Parliament were a reality TV show then the whole lot of us, I’m afraid, would have been voted out of the jungle by now.

“But at least we would have the consolation of a speaker being forced to eat a kangaroo testicle.”

He then attacked Labour leader Jeremy Corbyn and called the opposition “chlorinated chickens.” This was made in reference to Corbyn refusing to allow the prime minister to hold an election that could see the chicken being imported from the US.

With some at the conference laughing tears Johnson hailed UK exports with foreign nations with Jason Donovan’s CD being sent to North Korea, apparently, and praised an Isle of Wight ship builder that exports catamarans to Mexico.

He told the conference we need to “get Brexit done” to help cut taxes,”figuratively, if not literally, let us send Jeremy Corbyn into orbit where he belongs.”