Home Business News BBC One cancels all scheduled programmes amid the Queens health as Prince Charles, Camilla and William travel to Balmoral Castle 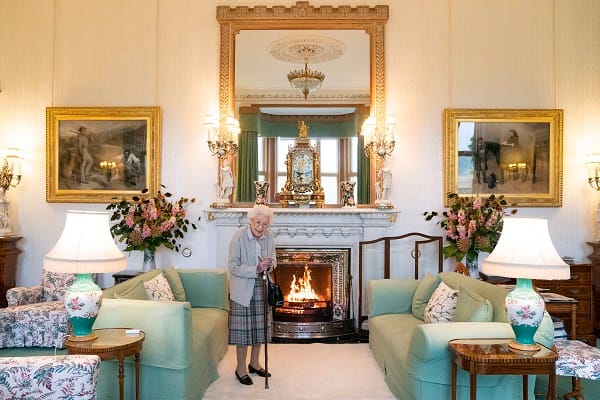 BBC One cancels all scheduled programmes amid the Queens health as Prince Charles, Camilla and William travel to Balmoral Castle

BBC One has cancelled all scheduled programmes this afternoon until 6pm amid the Queen’s health and the family have travelled to Balmoral Castle.

Prince Charles, Camilla and Prince William travelled to Balmoral to be with the Queen, Clarence House and Kensington Palace said.

Kensington Palace confirmed that the Duchess of Cambridge is remaining in Windsor with Prince George, Princess Charlotte and Prince Louis.

Harry and Meghan are also heading to Balmoral Castle, a spokesperson said for the Duke and Duchess of Sussex.

The programme, Bargain Hunt was interrupted and a BBC newsreader said, “Welcome to viewers on BBC One.

“We have had news from Buckingham Palace that the Queen is under medical supervision at Balmoral.

“It is understood that she is comfortable and that immediate family members have been informed with a course that news that she’s under medical supervision, raising concerns for her health.

“Yesterday she pulled out of a virtual Privy Council after doctors ordered her to rest that was after a very full day on Tuesday.

“We see a picture here from the Queen at Balmoral as she met with the new Prime Minister Liz Truss and invited her then to form a government.

“She’d previously of course met Boris Johnson, so it was a very busy day for the Queen who has largely been out of the public eye.

“We’ve known that she’s had mobility issues for some time.

“And the reason for the meetings with the outgoing and incoming Prime Ministers at Balmoral was because of those mobility concerns for the Queen.”

Buckingham Palace issued a statement about the Queen’s health, “Following further evaluation this morning, The Queen’s doctors are concerned for Her Majesty’s health and have recommended she remain under medical supervision.

“The Queen remains comfortable and at Balmoral,” the Palace’s statement concluded.

Labour leader Sir Keir Starmer said he is ‘deeply worried’ by the news from Buckingham Palace.

He tweeted, “Along with the rest of the country, I am deeply worried by the news from Buckingham Palace this afternoon.

“My thoughts are with Her Majesty the Queen and her family at this time, and I join everyone across the United Kingdom in hoping for her recovery.”

Prime Minister Liz Truss said, “The whole country will be deeply concerned by the news from Buckingham Palace this lunchtime.