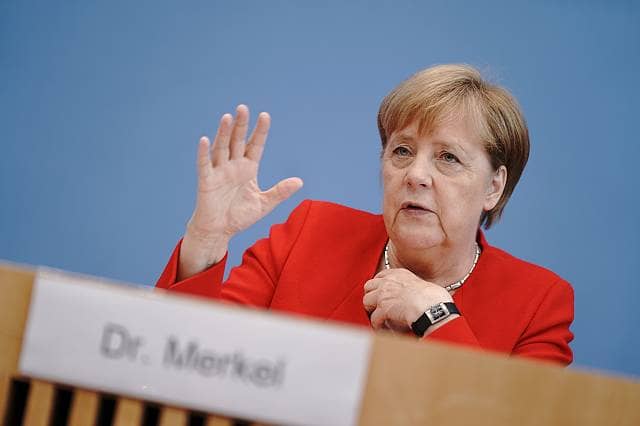 Coronavirus is now transmitting between person to person contact across 30 countries in Europe the World Health Organization (WHO) has warned.

The German chancellor Angela Merkel has warned as much as 70% of people in the country could become infected with the deadly coronavirus.

Merkel addressed a parliamentary group meeting of her Christian Democratic Union party in Berlin on Tuesday.

The chancellor said that 58m Germans could get infected with the disease if it starts to peak, according to insiders who spoke to Bild newspaper.

When the announcement was made there was silence among other politicians at the meeting, Bild reported.

Merkel told her party that “Sixty to 70% of people in Germany will become infected with the coronavirus.

“We are facing a challenge that we have never had before.”

However, the German Health Minister Jens Spahn pointed out during the meeting that 80% of all infected patients will show no symptoms.

Events with more than 1,000 people should be scrapped until further notice, after coronavirus cases in Germany soared past 1,100 this week, Spahn said.

The German economy minister, Peter Altmaier said the outbreak is hitting their economy as a result of people cancelling holidays, hitting the tourism sector.

He added, that the industry is expected to suffer supply chain problems in the coming weeks.

Coronavirus has now engulfed Europe, which has recorded over 17,000 cases and more than 700 deaths in Europe alone.

The Italian prime minister Giuseppe Conte, ordered 60m citizen’s to stay at home and must get permission for essential travel.

In a TV address to the Italian nation Conte said the emergency measures are to protect the vulnerable and elderly, he said, “there is no more time.”

Conte said the best thing was for people to stay at home. “We’re having an important growth in infection… and of deaths,” he said in an evening address on Monday.

Conte added, “The whole of Italy will become a protected zone.

“We all must give something up for the good of Italy. We have to do it now.”

Professor Neil Ferguson, of Imperial College London’s faculty of medicine has said Italy could have more than 100,000 coronavirus cases.

He estimates that are at least 50,000 to 100,000 of coronavirus across the country, which is the worst affected country in western Europe.

The death rate has doubled over night to 463, which is around 5% and 9,172 people are confirmed to be infected and 724 people have recovered.

Sergio Brusin from the European Centre for Disease Prevention and Control told the BBC’s Victoria Derbyshire programme on Monday, “The UK is in the same situation Italy was two weeks ago.”