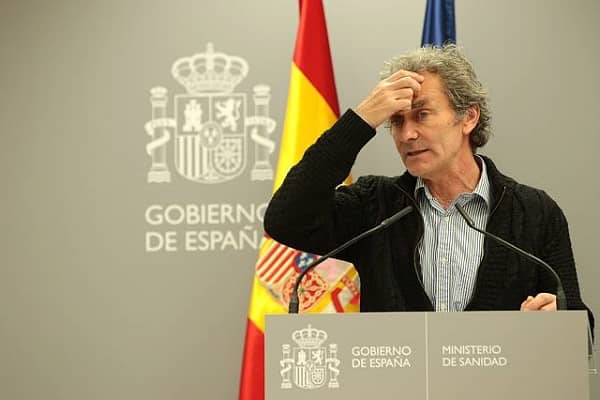 1,500 new cases of coronavirus spike in just one day across Spain

Spanish Public Health Officials have announced that coronavirus cases have risen by 1,500 in just 24 hours, to more than 5,700.

On Friday the World Health Organization (WHO) has said Europe is now the epicentre of the coronavirus outbreak.

He said, “Europe has now become the epicentre of the pandemic, with more reported cases and deaths than the rest of the world combined, apart from China.

“More cases are now being reported every day than were reported in China at the height of its epidemic.”

All bars, restaurants, shops except food shops and pharmacies have been closed. The Spanish government are set to announce a national lockdown as part of a “state of emergency.”

On Friday the British Foreign & Commonwealth Office (FCO) has issued a warning to Brits travelling to parts of Spain, they are advising against all but essential travel to certain regions.

Dr Ghebreyesus said, “You can’t fight a virus if you don’t know where it is.

“Find, isolate, test and treat every case to break the chains of Covid transmission. Every case we find and treat limits the expansion of the disease.

“Do not just let this fire burn,’ he said. ‘Any country that looks at the experience of other countries with large epidemics and thinks ‘that won’t happen to us’ is making a deadly mistake.”

WHO experts have slammed the British government’s coronavirus plans for a second time, they said the approach to allow UK citizens to develop “herd immunity” against the potentially deadly infection is wrong.

WHO director general said every country should find and test every possible case and gravely warned, not to “just let this fire burn.”

The British prime minister and his team of scientific advisers said on Thursday that the aim of the government’s approach is to slow the progress of the virus as it sweeps through the population.

The chief scientific adviser, Sir Patrick Vallance said around 60% of the population, 40m people will need to catch the virus to build up a national tolerance strong enough to stop the virus circulating.

However, the WHO spokeswoman Dr Margaret Harris hit out as the UK’s decision to aim for mass immunity.

Dr Harris said, at the moment not enough is known about the “science of this virus” to allow millions to become infected.

She told BBC Radio 4’s Today programme, “We don’t know enough about the science of this virus, it hasn’t been in our population for long enough for us to know what it does in immunological terms.

“Every virus functions differently in your body and stimulates a different immunological profile.

“We can talk theories, but at the moment we are really facing a situation where we have got to look at action.”

The former health secretary Jeremy Hunt has questioned Boris Johnson’s strategy in tackling the coronavirus and said it is “concerning.”

Hunt who is the chair of the House of Commons Health select committee questioned the decision not to cancel mass gatherings after Johnson said on Thursday that many more families would “lose loved ones before their time.”