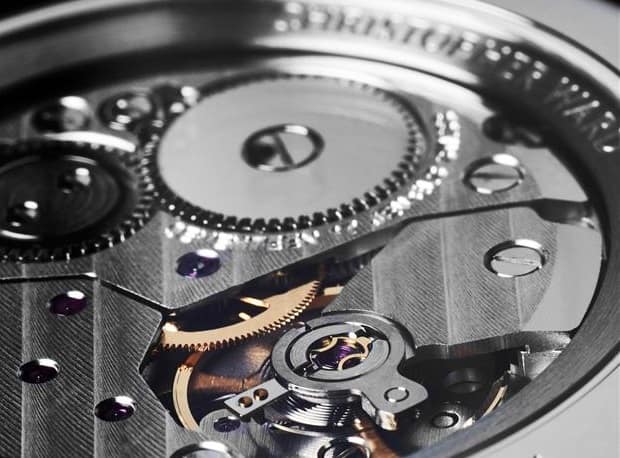 10 crazy facts about one of the slimmest mechanical watch

We caught up with Adrian Buchmann, Senior Designer at Christopher Ward, to talk about the super-slim C5 Malvern 595, which is their slimmest watch to date.

At just 5.95mm, the C5 Malvern 595 is also one of the thinnest mechanical watches in the world.

For Ward, it is important to be able to keep the costs down: “Unlike many household name watch brands who charge the consumer anywhere between seven to twelve times the cost of production of a timepiece, we only ever charge two to three times the cost of manufacturing”.

We can keep our overheads down as we have a direct-to-consumer business model, and don’t undertake costly celebrity sponsorship, he added.

Many of the components within the watch really are miniscule. The mechanical movement is just 2.5mm thick and the dial just 0.4mm thick, but the slimmest component is the watch hands, which are just 0.16mm thick.

According to Ward: “You need a little security distance between each component to ensure they all function correctly. The biggest risk you run on a watch such as this is that as the components get slimmer, they get more fragile.”

4) 92 different parts make up the watch

There are 92 separate parts that make up the entire watch, and every piece has to be perfectly synchronised for the watch to work.

5) The watch weighs just 33 grams- the weight of a standard lightbulb!

According to Ward, the process of designing the watch is really all about the wider group that sat around the table: “There are a lot of stakeholders in the design and manufacturing process – designers, technical construction, decision makers, product management, and marketeers. It is only when you connect all these people that the design truly gets created.”

The C5 Malvern 595 is machined out of 316L steel – a high grade, anti-corrosive steel that is widely used in Swiss watches, but also in construction and marine projects. It is the standard for any timepiece that is high grade, and a higher-grade steel than used in many watches from the Far East, Ward added.

He goes on to explain the multi-step process: “First you stamp the outer shape of the watch into the metal (this is a 10-20 step process in itself). You then use a special machine called a CNC machine (which can be 3, 4 of 5 axis) that controls the watch production process. The metal then goes in an extremely hot oven to relax the metal and help the metal keep its strength.”

“For dress watches, white is always an established, timeless option for a face colour. In addition, we wanted to offer something different but that has a lot of appeal, and we decided upon slate grey. We had always liked slate grey but hadn’t found the right watch for this colour until now.”

9) It is one of the thinnest Swiss mechanical watches in the world below £1,000

There are a handful of even thinner watches than the C5 Malvern 595, but which retail at far higher a cost.

The watch’s movement (or calibre) is the engine that drives the watch and makes its functions work, according to Ward.

For the C5 Malvern 595, we have used the ETA 7001 movement, a hand-wound mechanical calibre with a 42 hour power reserve and an anti-shock system. The reserve is slim, functional, and ensures the watch is perfect for everyday use, he added.