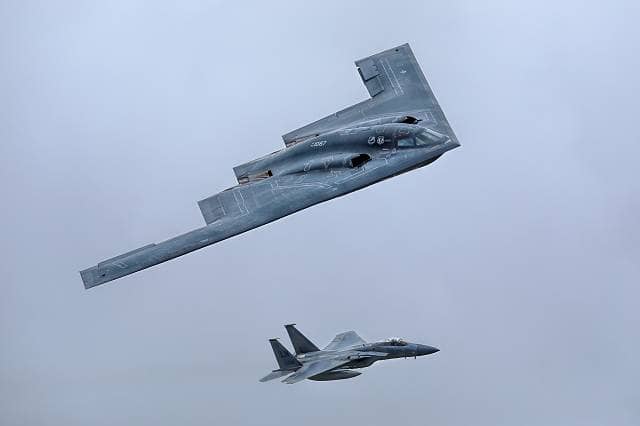 Three US B2 stealth bombers have arrived in the UK which are ready to undertake nuclear bombing raids have been deployed to RAF Fairford.

The US B2 bombers call signs are death one, death two and death three as the only US aircraft capable of dropping a payload of up to 20 tonnes of nuclear or conventional bombs.

It has been revealed that the US bombers are ready and prepared to undertake nuclear strikes against Russia. Russia has been increasing their military presence in the Artic region and is constantly flying their aircraft close to UK airspace creating tension.

Colonel Kurt Wendt told ITV News, “This is a visual statement. It is a tough message.

“The US and its allies can apply combat power at anytime, anywhere.”

He added, that his US B2 pilots are ready to have “their finger on the nuclear payload.”

This is the first time US B2 nuclear bombers have trained with non-US F-35’s and are part of a secret missions in Europe.

The US has recently accused Vladimir Putin of expanding Russia’s influence into the Artic region.

A US European Command spokesperson said, “The deployment of strategic bombers to the UK helps exercise RAF Fairford as US Air Forces in Europe’s forward operating location for bombers.

Adding, “Training with partners, allied nations and other US Air Force units contributes to our readiness and enables us to build enduring and strategic relationships necessary to confront a broad range of global challenges.”

The B2 stealth bombers cost around $2bn each and can carry 16 GPS guided bombs and fly 33 hours, travel 10,000 miles and are capable of mid-air refuelling.

The aircraft are invisible to radar and operate out of sight and strike without warning, making the B2 stealth bomber one of the most deadly warplanes.