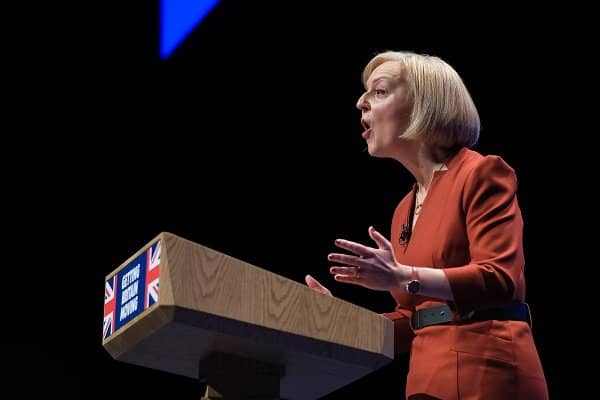 The Prime Minister has promised to “get Britain moving” as Liz Truss delivered her first keynote speech.

Addressing Tory members at the conference in Birmingham Truss warned that we are in “stormy days” and was heckled by Greenpeace protestors who held up a banner and heckled “who voted for this.”

Greenpeace said in a tweet the protestors were at the conference to “denounce the Prime Minister ‘shredding’ her party’s 2019 manifesto promises.

“The PM is U-turning on fracking, strong climate action, and world-leading environmental protections. Who voted for this?”

Truss said, “In these tough times, we need to step up.

“I am determined to get Britain moving, to get us through the tempest and put us on a stronger footing as a nation.

Truss said that the Chancellor Kwasi Kwarteng “will keep closely co-ordinating our monetary and fiscal policy.”

Truss promised “an iron grip on the nation’s finances” and vowed to break Britain out of a “high-tax, low-growth cycle.

She added, “The chancellor and I are in lockstep on this.”

She said, “so let me be clear, we have your back.”

The Prime Minister then outlined three priorities for Britain’s economy, she said, “growth, growth and growth.

She then said, “will not allow the anti-growth coalition of Labour, the Lib Dems and the SNP to hold us back.”

Attacking the Labour leader Sir Keir Starmer she accused him of having “no long-term plan and no vision for Britain.”

She suggested that there could be more “disruption,” and Truss promised that her government will always be “fiscally responsible.”

Responding to the Prime Minister’s speech, Labour’s shadow chancellor Rachel Reeves said, “The most important thing the prime minister can do right now to stabilise the economy is to immediately reverse her government’s kamikaze budget when Parliament returns next week.”

Liberal Democrat leader Sir Ed Davey said the address was a complete “disaster for families and the economy.”