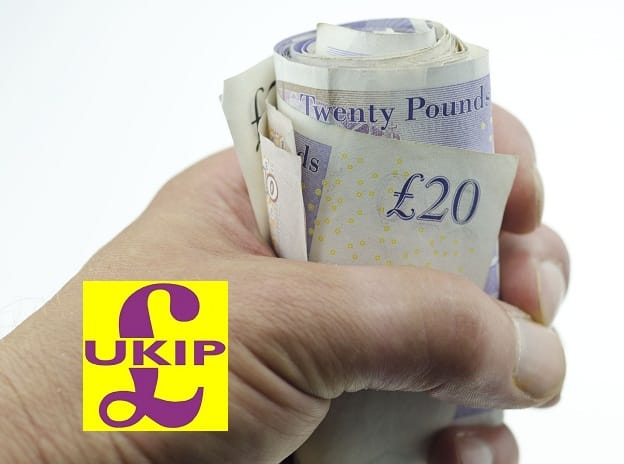 Nigel Farage’s party has raised over £3m this year

In October this year, UKIP leader Nigel Farage was fined £200 for failing to declare a donated office to the Electoral Commission.

In response to the fine, the commission said it was “satisfied that there had been no intent to hide the donations”.

Farage may not have meant to hide the donation, but he could be forgiven for struggling to keep up with the amount of cash (and non-cash contributions) pouring in to support UKIP.

When: Donations staggered throughout the year

Paul Sykes, UKIP’s largest donor, donated over £1.3m through his Harrogate-based property firm Highstone Group Ltd. According to the Electoral Commission, the donations were mostly non-cash and were made in the form of advertising. Known to be worth over £650m, he has contributed more than £4m to the party over the years through his company.

He’s previously told MailOnline: “I’ve no interest in piling up money for the sake of it. What’s the point? I could give it all away tomorrow. But I’m not a mug that’s just handed over a chunk of money to UKIP — I am properly involved.”

Former Conservative supporter Arron Banks forked out a million pounds as gift to UKIP after saying he just intended to give £100,000. The big donation was given as an answer to former Foreign Secretary William Hague, who had called Banks a “nobody”.

At the time, Banks said: “I woke up this morning intending to donate £100,000 to UKIP and I understand Mr Hague called me a nobody.

“So, in light of that and because I am a strong advocate of leaving the European Union, I have decided today to donate £1m to the party and not the £100,000 we originally agreed.”

A source at the time told The Guardian: “Desmond thinks backing UKIP will be good for the papers commercially. The word is that Farage has offered him a peerage if it all works out, and this, even more than money and the respect of London’s Jewish community, is what he craves now.”

Founder of spread betting firm IG Index, Wheeler donated a generous £5m to the Tories in 2001. In 2009, he donated £100,000 to UKIP. This angered Cameron, who ousted the spread betting tycoon from the party.

When: February, April and September

Why: Based in Mayfair, Growth Financial Services Ltd stumped up £30,000, £50,000 and £5,000 towards UKIP donations in February, April and September respectively.

The financial advisors do not have a website. According to Buzzfeed UK, the company is a sister company to Harwood Capital Management Limited, a hedge fund.

Harwood’s managing partner Christopher Mills is worth £200m, according to the 2013 Sunday Times rich list.

Shoreditch-based Mura Estates are working on residential developments in east London. Their current projects include 213-217 Bow Road, a development of 36 apartments in three buildings.

The developers have kept a low-profile about their donation by not commenting on it in the past.

When: February and March

Birley made two cash donations worth £25,000 each in February and March this year. He then made a further cash donation of £5,000 in September this year.

When: January, June and July

Why: Bown Properties provide estate management services in Gravesend. They don’t have a website so details for the reasons of their donation remain unknown.

When: March, April, May, June

Derek Roland Clark is a member of UKIP and of the European Parliament for the East Midlands. He stood as a UKIP candidate in the 2010 general election for Northampton South.

Clark made four donations to UKIP this year. Here’s a breakdown:

When: February, March, May, April

RMPI LLP is an independent legal advice to victims of accidents. Based in Mayfair, they donated £9,015 each over the course of the year.

UKIP hasn’t commented on the donation.