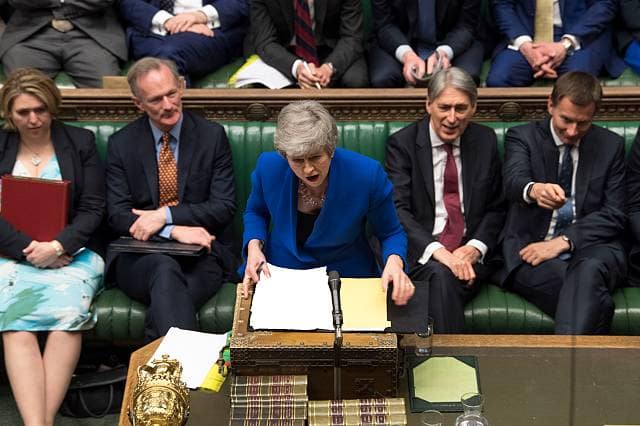 Addressing the House of Commons on Thursday Theresa May told MPs, it is their “national duty” to pass the Brexit deal.

The prime minister said agreeing the extension with the EU was the only to avoid the UK being forced to hold European Parliament elections on 23 May.

She told MPs, “We need to resolve this. So that we can leave the European Union with a deal as soon as possible.

“This is our national duty as elected members of this House – and nothing today is more pressing or more vital.”

The PM told MPs in the Commons talks with the EU were “difficult.”

She said, “The discussions at the council were difficult and unsurprisingly many of our European partners share the deep frustration that I know so many of us feel in this House over the current impasse.”

However, is no agreement can be reached over a deal, then the government will put alternatives to MPs for a series of votes.

May said, if agreement on a deal could not be reached, the Government will put alternatives to MPs in a series of votes and would abide by the result.

She said, “I hope that we can reach an agreement on a single unified approach that we can put to the House for approval.

“But if we cannot do so soon, then we will seek to agree a small number of options for the future relationship that we will put to the House in a series of votes to determine which course to pursue.

“And as I have made clear before, the Government stands ready to abide by the decision of the House.

“But to make this process work, the Opposition would need to agree to this too.”

The PM said, “I welcome the discussions that have taken place with the Opposition in recent days, and the further talks which are resuming today.

“This is not the normal way of British politics, and it is uncomfortable for many in both the Government and opposition parties.

“Reaching an agreement will not be easy, because to be successful it will require both sides to make compromises.

“But however, challenging it may be politically, I profoundly believe that in this unique situation where the House is deadlocked, it is incumbent on both front benches to seek to work together to deliver what the British people voted for.

“Crucially, any agreement on the future relationship may involve a number of additions and clarifications to the Political Declaration.”

Labour leader Jeremy Corbyn said to May, “The second extension in the space of a fortnight represents not only a diplomatic failure, but it is another milestone in the government’s mishandling of the entire Brexit process.”

David Davies the former Brexit secretary said no progress has been made, pressure on May to quit is going to increase.

Davies told the BBC, “I think what is likely to happen is the pressure for her to go will go up.

“The pressure on her to go will increase dramatically, I suspect, now.”