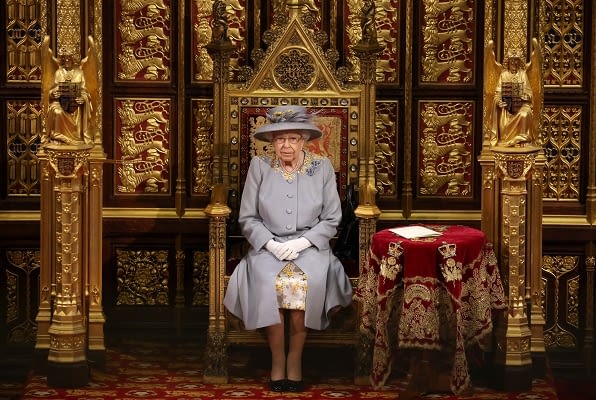 The Queen gives her speech for the State Opening of Parliament

The Queen has delivered Prime Minister, Boris Johnson’s plans for the year ahead.

Here is the Queen’s speech in full.

“MY LORDS AND MEMBERS OF THE HOUSE OF COMMONS

My Government’s priority is to deliver a national recovery from the pandemic that makes the United Kingdom stronger, healthier and more prosperous than before.

To achieve this, my Government will level up opportunities across all parts of the United Kingdom, supporting jobs, businesses and economic growth and addressing the impact of the pandemic on public services.

My Government will protect the health of the nation, continuing the vaccination programme and providing additional funding to support the NHS. My Ministers will bring forward legislation to empower the NHS to innovate and embrace technology. Patients will receive more tailored and preventative care, closer to home. Measures will be brought forward to support the health and wellbeing of the nation, including to tackle obesity and improve mental health. Proposals on social care reform will be brought forward.

My Government will build on the success of the vaccination programme to lead the world in life sciences, pioneering new treatments against diseases like cancer and securing jobs and investment across the country.

My Ministers will oversee the fastest ever increase in public funding for research and development and pass legislation to establish an advanced research agency.

Following the unprecedented support provided to businesses during the pandemic, proposals will be brought forward to create and support jobs and improve regulation.

My Government will strengthen the economic ties across the union, investing in and improving national infrastructure. Proposals will be taken forward to transform connectivity by rail and bus and to extend 5G mobile coverage and gigabit capable broadband.

Legislation will support a lifetime skills guarantee to enable flexible access to high quality education and training throughout people’s lives.

Measures will be introduced to ensure that support for businesses reflects the United Kingdom’s strategic interests and drives economic growth. Laws will simplify procurement in the public sector. Eight new Freeports will create hubs for trade and help regenerate communities.

My Government will ensure that the public finances are returned to a sustainable path once the economic recovery is secure.

Measures will be brought forward to ensure that children have the best start in life, prioritising their early years. My Ministers will address lost learning during the pandemic and ensure every child has a high quality education and is able to fulfil their potential.

My Government will help more people to own their own home whilst enhancing the rights of those who rent. Laws to modernise the planning system, so that more homes can be built, will be brought forward, along with measures to end the practice of ground rents for new leasehold properties. My Ministers will establish in law a new Building Safety Regulator to ensure that the tragedies of the past are never repeated.

Measures will be brought forward to address racial and ethnic disparities and ban conversion therapy.

My Government will invest in new green industries to create jobs, while protecting the environment. The United Kingdom is committed to achieving net zero greenhouse gas emissions by 2050 and will continue to lead the way internationally by hosting the COP26 Summit in Glasgow. Legislation will set binding environmental targets. Legislation will also be brought forward to ensure the United Kingdom has, and promotes, the highest standards of animal welfare.

My Government will strengthen and renew democracy and the constitution. Legislation will be introduced to ensure the integrity of elections, protect freedom of speech and restore the balance of power between the executive, legislature and the courts. My Ministers will promote the strength and integrity of the union. Measures will be brought forward to strengthen devolved Government in Northern Ireland and address the legacy of the past.

My Government will introduce measures to increase the safety and security of its citizens.

Legislation will increase sentences for the most serious and violent offenders and ensure the timely administration of justice. Proposals will be brought forward to address violence, including against women and girls, and to support victims. Measures will be brought forward to establish a fairer immigration system that strengthens the United Kingdom’s borders and deters criminals who facilitate dangerous and illegal journeys.

My Government will lead the way in ensuring internet safety for all, especially for children whilst harnessing the benefits of a free, open and secure internet.

My Ministers will provide our gallant Armed Services with the biggest spending increase in thirty years, taking forward their programme of modernisation and reinforcing the United Kingdom’s commitment to NATO. My Ministers will honour and strengthen the Armed Forces Covenant, placing it in law. Measures will be introduced to provide National Insurance contribution relief for employers of veterans.

Legislation will be introduced to counter hostile activity by foreign states. My Ministers will implement the Integrated Review of Security, Defence, Development and Foreign Policy.

The United Kingdom will host the G7 Summit and lead the global effort to secure a robust economic recovery from the pandemic. My Ministers will deepen trade ties in the Gulf, Africa and the Indo-Pacific.

MEMBERS OF THE HOUSE OF COMMONS

Estimates for the public services will be laid before you.

MY LORDS AND MEMBERS OF THE HOUSE OF COMMONS

Other measures will be laid before you.

I pray that the blessing of Almighty God may rest upon your counsels.”