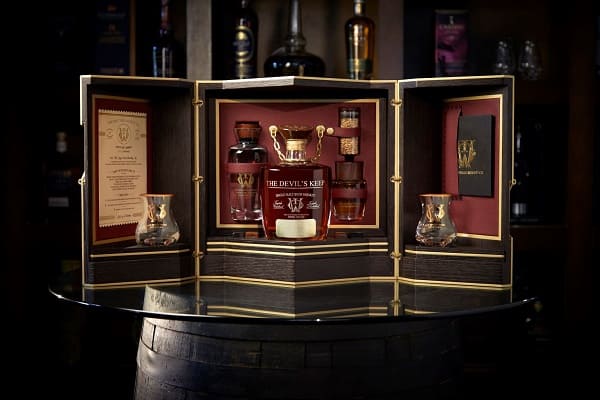 The Devil’s Keep: The world’s most expensive first release Whiskey

Craft Irish Whiskey Co. is delighted to announce its first release and exclusive launch of a limited 333 bottles of very rare triple distilled, 29-year-old single malt whiskey, The Devil’s Keep. Its conspicuously decadent alchemy of the freshest Irish water and finest barley aged in 200 litre ‘first fill’ American oak casks previously storing bourbon, then finished in rare French Oak barrels that held Tawny Port, before a final finish in virgin Hungarian oak, makes it the finest whiskey that Ireland has ever created, and also a discerning and legacy investment. In November 2020, Devil’s Keep already achieved the world record for the most expensive inaugural whiskey release ever at auction at USD $60,000 (almost £46,000 and €51,000).

Notably, during this pandemic year, CIWC’s sister company, Whiskey & Wealth Club, has seen a significant uptick in interest from investors hedging risk by seeking stable alternative investments outside of the traditional financial markets. The company offers private individuals access to the rarefied world of wholesale premium cask whiskey ownership. Knight Frank’s Wealth Report 2020 reported that rare whiskey was the best performing collectable, with the value having increased in the last decade by 564%. Irish whiskey exports have also leapt by an extraordinary 300% in a decade and are demonstrating 12 to 14 percent year-on-year growth. Current Irish whiskey production already matches the historical 12 million case high before the turn of the last century, with forecasts that this will rise to 24 million by the end of this decade. Working distilleries are opening to meet the surge in demand in this fastest growing brown spirits market segment, with about 32 distilleries now operating in Ireland.

Jay Bradley, Founder of The Craft Irish Whiskey Co said, “We’re thrilled to be celebrating Ireland’s whiskey resurgence by launching the Devil’s Keep, which has been a crusade sparing no expense to source the finest ingredients, and the most sublime flavours  – it truly is the culmination of our devotion, passion and craft.”

For many years Scotland has dominated whiskey through the sheer breadth and depth of its offering. They’ve offered everything from lower-shelf, mass-produced blends to mid-shelf, higher-quality household names, as well as top-shelf brands. Yet, there has always been a gap in the market for ultra-luxury whiskeys. Born from a conversation with my late father, The Craft Irish Whiskey Co. has a single mission: to create the finest whiskeys Ireland has ever made and to redefine global perceptions of luxury, while building a legacy.”

The Devil’s Keep was born a stone’s throw from the Giant’s Causeway in County Antrim, where it had been poured into premium white oak bourbon barrels. Years of maturation has imparted profiles such as vanilla, caramel, toasted sugar and the rich smokiness of toasted oak staves.  A once in a lifetime discovery in a Portuguese bodega uncovered rare, 100-litre French oak barrels steeped in a deliciously viscous Tawny Port. Disgorged into these priceless casks, The Devil’s Keep developed its luxurious smoothness, complexity and flavour. Finally, the spirit was perfected in virgin Hungarian oak — deep stave toasted — to caramelise the wood’s sugars and impart rich vanilla, wild honey and toasted maple syrup notes. Together this holy trinity of maturation creates an unparalleled breadth and depth of flavour.

Uniquely, water has been added before final maturation to ensure that these extraordinary flavours remain undiluted. As the years of evaporation have taken the ‘angel’s share,’ the cask contains what legend tells is the spirit that the devil keeps for himself — honoured in the whiskey’s name. The resulting cask strength emerges as a perfect 48.5% ABV.

The whiskey’s treasures are now guarded within two custom locked cases, secured by a bespoke brass Japanese style lock. The exquisite bottle, created by designer Tiago Russo, is unchained to unleash The Devil’s Keep taste experience. Water from the same region the whiskey was made from is also impeccably presented in a glass carafe within the case, to be applied with precision using a gold-plated pipette, allowing the initiated to open up the flavours without dilution – all to be drunk from a custom designed glass with science and craft built in to enhance the nose and amplify the flavours.

Also found within the case are whiskey stones which have been crafted from obsidian to be used in place of ice to avoid further dilution — as well as an atomiser containing the ‘angel share,’  captured by expert perfumer Sarah McCartney. Never before has anyone attempted to capture the unmistakable aroma one gets as they walk through the hallowed halls of a maturing whiskey warehouse. The smell of aging oak, vanilla, malted barley and musk all culminates in what is called The Angles Share as the whiskey evaporates out of the barrel, into the ether.  A jar of Ireland’s malted barley sourced from the same malting house the Devil’s Keep was made from some 30 years earlier further excites the palate and is a poignant reminder of the whiskey’s source.

It is little known that Ireland invented whiskey in the 14th century and dominated the sector. By the 1800s, a group known as the ‘Dublin Whiskey Masters’ brought the art of whiskey making to its zenith with iconoclastic disruption. However, although Irish whiskey suffered a dramatic decline due to an unfortunate set of geopolitics, it is now being reborn and today, they are clawing back past glories. Ireland’s emerging, small-scale but disruptive distilleries have the talent and freedom to innovate whiskey on a scale not seen since the 19th century. The Devil’s Keep sees the age-old secrets of Ireland’s whiskey masters re-imagined with the launch of the oldest ever released triple distilled Irish whiskey and the most expensive first release in the history of whiskey.

Significantly, next year The Craft Irish Whiskey Co.’s very special second launch, a 7 piece collection whereby all pieces are one of a kind ‘The Emerald Isle Collection’ in partnership with Fabergé, bringing together the strong heritage of both brands in a series of highly collectable and unique special-edition bottles.