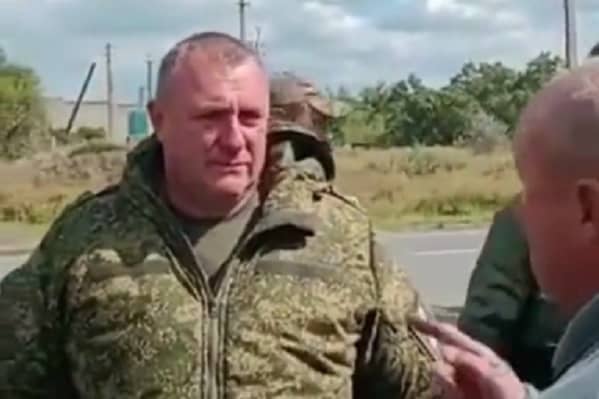 Vladimir Putin’s separatists from the Russian backed Luhansk province are staging mutiny and are refusing to fight and dropped their weapons.

Footage shows that they are moaning over conditions pay and poor equipment and they told a Russian commander “we’re not going anywhere else you can f****** shoot us.”

A furious soldier shouted at his commander, “The officership have all been f****** looters since day one. “They brought things here by truck. Who are you? Capitan from Luhansk?

Watch: Russia use deadly thermobaric vacuum weapons as they are running out of troops and weaponry

“You didn’t know that?! The truck used to come here with the appliances!

“And we haven’t had a vacation not once in seven months!”

The Luhansk soldier blew his top and shouted, “[Unclear] should be shot. All of them from the combats… [unclear] … How many new cars the f****** brought here.

“Look what we drive.

The Luhansk soldiers shouted at the Russian commander, “We’re not going anywhere else. You can f****** shoot us.

“Call the prosecutor’s office in Russia.

Very chaotic conversation, but we could hear some interesting things. "LNR" soldiers are not satisfied that:
– they fight for 7 months without rotation;
– officership loot everything. pic.twitter.com/AVBCnGTY4X

The Russian military blogger “Moscow Calling” warned that Putin and the Kremlin are seeing the inevitable final, the defeat of the Russian Federation” is “just a matter of time.”

In the northeast on the Kharkiv front line the Ukrainian Armed Forces (UAF) have delivered a powerful counterattack against Russian troops and they have been “surrounded.”

Ukrainian forces are also now within striking distance of Izyum where there are thousands of Russian troops are holed up.

President Volodymyr Zelensky’s troops have now reached the Oskil river as Senkove and they have now cut of Russia’s main line of communication with forces based in Izyum.

Thousands of Russian troops are now trapped and Putin could lose an entire army group of troops meaning Ukrainian forces could win the Donbas which has rocked the foundations of the Kremlin.