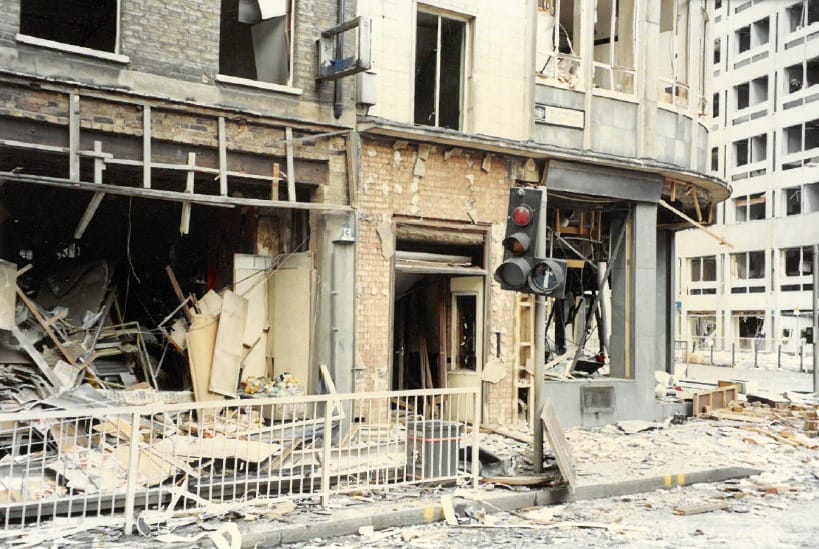 To mark 25 years since the detonation of a Provisional Irish Republican Army bomb in the heart of the Square Mile, the City of London Police are releasing never-before-seen crime scene photos of the devastation it caused.

A number of officers who were at the scene on 24 April 1993 and still work for the force today, have been recounting their experiences and memories of the huge explosion and the way policing in the City changed as a result.

The bomb, planted in a stolen truck which was parked outside 99 Bishopsgate by the junction with Wormwood Street, caused an estimated £350m worth of damage, injured 44 people and resulted in the death of Ed Henty, a News of the World photographer.

PC Richard Fullbrook said: “You could see the smoke coming up from the vicinity of Bishopsgate and the first thing that struck you was the taller buildings. The damage to, what was then, Natwest Tower, and places like that. It was total devastation.

“There was this huge plume of water coming out everywhere and the St Ethelburga’s Church was just rubble.

“Even now after all these years, it’s something you do remember quite well because I don’t think anyone had ever seen devastation like it before.”

For PC Joanne Richardson the effects of the bomb stayed with her for years. Standing on one of the outermost cordons, Richardson heard the bomb go off before glass rained down, injuring her in the process.

“There was a little shop in front of me and the window blew in and I got thrown into a doorway. I felt this immediate pain in my right eye. I remember having my hand over my eye and being scared to look. I knew there was something in there. When I looked down my white shirt was filthy, my face was filthy, everything was filthy.

“Everything from the ground had been blown up and thrown into my face. I was off work for 3-4 weeks but it’s the emotional and psychological effects that stay with you for a lot longer. If I heard a car backfiring or a roll of thunder for a good couple of years I was a little bit jittery to say the least.”

Following the incident, the City of London Police implemented a ‘ring of steel’ in July 1993. Most routes into the City were closed or made exit-only, and the remaining routes had checkpoints manned by police officers 24 hours a day. There were CCTV cameras at each entry point – one to read the vehicle registration plate and another to monitor the driver and passenger – and pursuit police cars and motorcycles were stationed nearby to follow any suspicious vehicles.

Jonathan Bish, a retired PC who now works as a civilian staff member in the Control Room at Wood Street Police Station, said the introduction of these new tactics following the bomb was a very different style of policing for the UK mainland.

“Operation Orange, as we called it, involved police motorcycles, pursuit cars, and vans of Support Group and Firearms officers, putting in road blocks.

“Every vehicle coming through would be stopped and screened. If any vehicle tried to do a U-turn or break through the road block we were in a position to pursue it with armed officers.

“Sometimes we had ‘spotters’ further up the road in plain clothes to look at the behaviour of the drivers as they approached the checkpoint. The idea behind these tactics was not only to detect terrorists but also deter them.”